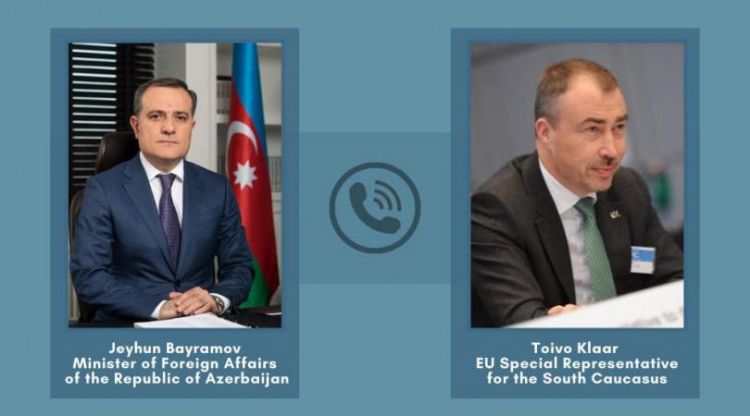 In a telephone conversation that took place at Klaar's initiative, on May 31, 2021, Bayramov stressed the importance of resolving the problem of border tensions and existing differences through negotiations.

He stressed that Azerbaijan supports the proposal to establish an appropriate trilateral commission on the delimitation and demarcation of the Azerbaijani-Armenian state borders.

As for the six Armenian servicemen detained during the provocation aimed at planting landmines on roads on the territory of Azerbaijan, it was stressed that such provocations by Armenia are unacceptable at a time when Azerbaijan is clearing its liberated territories of Armenia-planted landmines which pose a direct threat to human life.

Some 21 Azerbaijani citizens, including 14 civilians were killed and 87 citizens, 16 civilians were injured in mine explosions in liberated lands since the signing of the Karabakh peace deal on November 10, 2020.

Azerbaijani President Ilham Aliyev earlier described Armenia’s failure to provide the mine maps as the main difficulty for Azerbaijani IPDs to return to their homes. He said that this is yet another war crime by Armenia as several servicemen and civilians were killed in mine blasts on the liberated territories after the war.

In the early hours of May 27, a group of Armenian saboteurs sought to cross into Azerbaijani territories to plant mines on the supply routes leading to the Azerbaijani Army. Azerbaijan detained six of the saboteurs.

The border incidents have gained new momentum after the war in 2020 as the two sides have not agreed on the delimitation of the border.

On November 10, Baku and Yerevan signed a Moscow-brokered deal that brought an end to 44 days of fighting between Armenia and Azerbaijan. The Azerbaijani army declared a victory against the Armenian troops. The signed agreement obliged Armenia to withdraw its troops from the Azerbaijani lands that it has occupied since the early 1990s.

Before the signing of the deal, the Azerbaijani Army had liberated around 300 villages, settlements, city centres and historic Shusha city.

On January 11, the Azerbaijani, Russian and Armenian leaders signed the second statement since the end of the 44-day war. The newly-signed statement is set to implement clause 9 of the November 2020 statement related to the unblocking of all economic and transport communications in the region.