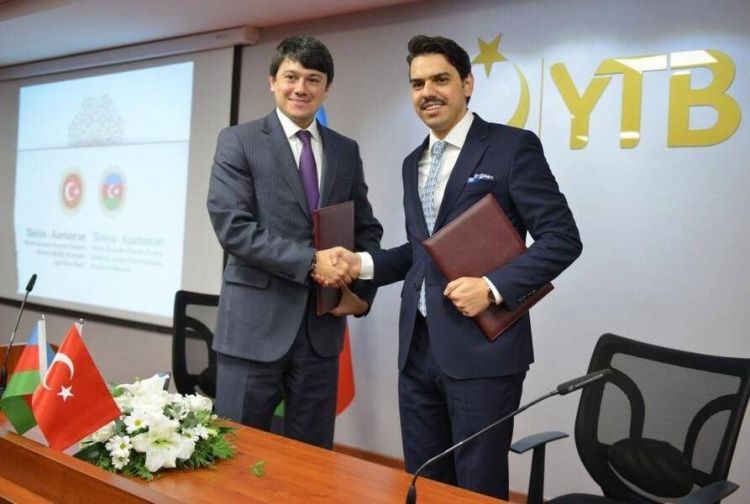 The cooperation between the diaspora institutions of Turkey and Azerbaijan will be further enhanced and strengthened with the recently inked Shusha agreement, the Presidency for Turks Abroad and Related Communities (YTB) stated on Tuesday, Eurasia Diary reports citing Daily Sabah.

The agreement provides the basis for more comprehensive and dense cooperation in the institutions’ activities within the scope of international law, the YTB said.

Through strengthening the cooperation between both countries’ diaspora, both will act together in the face of common challenges. The two countries’ diaspora institutions will also focus on the promotion of Turkey and Azerbaijan and will play significant roles in making heard historical realities to the world.

YTB head Abdullah Eren said, “We have carried out many examples of cooperation until today – ranging from education, history and culture – as the two countries’ diaspora institutions.

Noting Turkey's support of Azerbaijan during its 44-day war against Armenia in the Nagorno-Karabakh region, Ereb stated that the YTB visited Baku during those difficult times in a show of solidarity. He added that he came together with the government committee responsible for the diaspora and its head, Fuad Muradov.

“We will contribute to our unity, which is displayed the best by President Recep Tayyip Erdoğan and (Azerbaijan) President Ilham Aliyev with the principle, 'One people, One diaspora.'”

On June 15, Turkey and Azerbaijan signed a declaration “on allied relations” aimed at deepening ties in several areas of cooperation, including security, during Erdoğan's visit to Shusha – a city that Azerbaijan recaptured from Armenian occupational forces in last autumn’s conflict.

"But most important is the agreement on cooperation between Azerbaijan and Turkey in the defense industry sphere and mutual military assistance," Aliyev said last week at a news conference alongside Erdoğan.

Erdoğan, the first foreign leader to visit Shusha after it was retaken by Azerbaijan, also promised to open a Turkish consulate in the city. “In that way, we will ensure that our activities are carried out faster and more effectively,” he said.

The historic city was liberated by the Azerbaijani Armed Forces in November last year, after 28 years of Armenian occupation. Shusha, known as the pearl of Nagorno-Karabakh, was occupied by Armenia on May 8, 1992.

The town has significant military value since it is located on strategic high ground about 10 kilometers (6 miles) south of the region’s capital over Stepanakert (Khankendi) and on the road linking the city with Armenian territory. Besides its strategic significance, the town is known as a symbol of Azerbaijani history and culture with many historic sites, the restoration of which has started. Many prominent Azerbaijani musicians and scholars were born in the city.