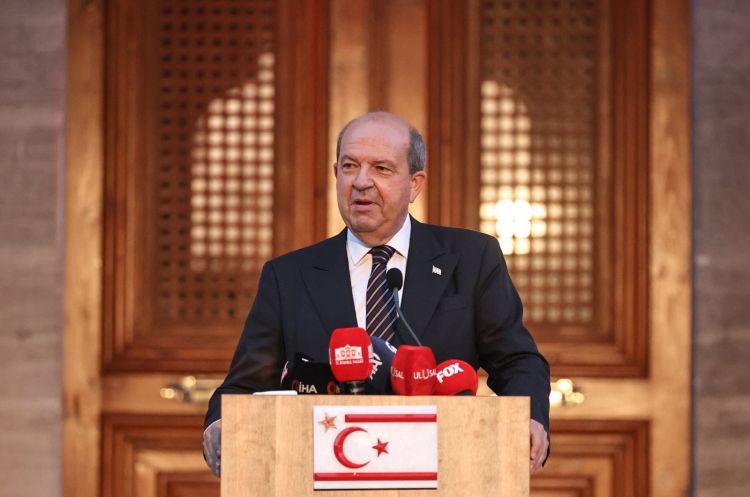 The Turkish Republic of Northern Cyprus (TRNC) cannot survive without Turkey's support, TRNC President Ersin Tatar said Tuesday.
Attending a reception in Istanbul to celebrate the 47th anniversary of TRNC's Peace and Freedom Day, marking the 47th anniversary of Turkey’s 1974 Peace Operation that protected the island’s Turkish Cypriot community from Greek Cypriot violence, Tatar noted that Turkish Cypriots have had big problems and have suffered a lot.
Talking about the Turks on the island that have been subject to violence over the years, Tatar said: "We went through the genocide twice. The year 1878 was one of the most painful years for the Turkish Cypriots. Because Cyprus, which we took from the Venetians with a one-year struggle in 1571, was rented by the British after 308 years of domination, and then unlawfully usurped. There, the Turkish Cypriots looked at the Taurus Mountains in solitude but without losing their hope."
Tatar stated that the foundations of a two-state solution were laid with the landing of Turkish soldiers on the island in 1974, and referred to the federation negotiations that have been going on for years.
Reminding that talks on how to establish a partnership and how to maintain the balance between Turkey and Greece are continuing, Tatar said: "Greek Cypriots have never had good intentions for a fair share and a lasting solution with Turkish Cypriots. Negotiations continued in front of various U.N. secretaries. Finally, the Annan Plan ... 'Say yes, you will be connected to the world,' they told us. They did not keep their promises and committed the greatest injustice. They unilaterally took Cyprus to the EU. The founding agreements are clear. Cyprus cannot be a member of any international institution and organization that Turkey and Greece are not members of. Therefore, Turkey is not a member of the EU. How does Cyprus enter the EU, of which Greece is a member?"
Expressing that they are in a great struggle at the point reached, Tatar emphasized that they are following the right policy for the national interests and the future in the Eastern Mediterranean.
Underlining that Turkey is very important for the security of the island, Tatar said: "We cannot exist without Turkey, we cannot live securely. Therefore, it is not possible for us to continue our existence constitutionally, politically and economically. We definitely need Turkey's guarantor, guarantee and shadow. The developing and rising Blue Homeland is very important for Turkey and Cyprus."
Cyprus has been mired in a decadeslong dispute between Greek and Turkish Cypriots, despite a series of diplomatic efforts by the U.N to achieve a comprehensive settlement.
Ethnic attacks starting in the early 1960s forced Turkish Cypriots to withdraw into enclaves for their safety.
In 1974, a Greek Cypriot coup aimed at Greece's annexation led to Turkey's military intervention as a guarantor power to protect Turkish Cypriots from persecution and violence. As a result, the TRNC was founded in 1983.
It has seen an on-and-off peace process in recent years, including a failed 2017 initiative in Switzerland under the auspices of guarantor countries Turkey, Greece and the U.K.
The Greek Cypriot administration entered the EU in 2004, the same year Greek Cypriots thwarted the U.N.'s Annan plan to end the longstanding dispute.
Both Turkey and TRNC have said a permanent peace in Cyprus can only come through the international community’s recognition of two separate states, upending decades of negotiations to reach a federation-based reunification accord.