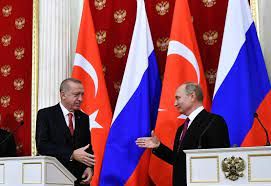 Presidents Vladimir Putin of Russia and Recep Tayyip Erdoban of Turkey will thoroughly discuss Ankara's commitment to the fight against terrorists in Syria's Idlib de-escalation zone, Russian Foreign Minister Sergey Lavrov told a Saturday press conference devoted to the outcome of his visit to New York for the 76th session of the UN General Assembly.
"We are in consultations with our Turkish partners who made a special agreement with us two years ago, committing to the fight against terrorists in the Idlib de-escalation zone and efforts to separate them from armed groups that are not terrorist and cooperate with Turkish troops," he noted. "The presidents of Russia and Turkey will hold another meeting in a few days where the implementation of these commitments will be thoroughly discussed. Clearly, the pace of implementation has been slow," Lavrov added.
Putin and Erdogan are expected to hold talks in the Russian Black Sea resort of Sochi on September 29. The Turkish leader said earlier that he planned to discuss the Syria issue with Putin in order to come to an important solution. The two leaders last met in March 2020. Later, they spoke on the phone and via video conference due to the coronavirus pandemic.