"Regardless of nationality, the special forces will kill them!" - Ukraininan expert says
Read: 188

Pakistan to hold next elections ‘on time’ after August 2023 - Prime Minister Sharif
Read: 144

With its balanced, active and conscientious foreign policy, Türkiye has gone from a regional actor to a global power, says Turkish Foreign Minister Mevlut Cavusoglu. 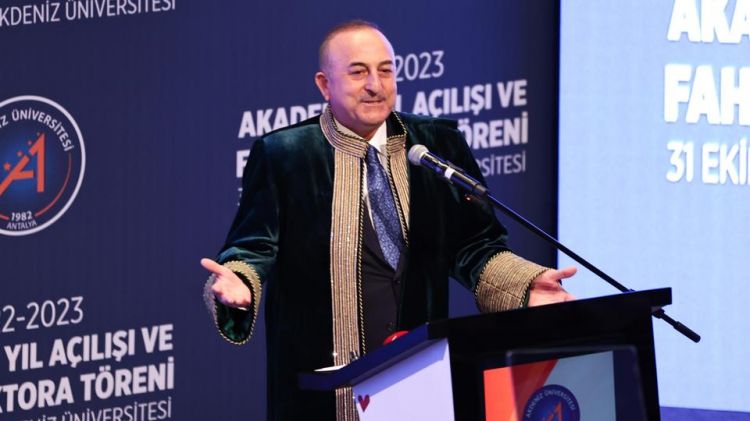 Stressing that the international system is currently facing unprecedented challenges, the nation’s top diplomat has underlined that Türkiye does not favour the weakening of Europe.
Speaking at an event at Akdeniz University in the Turkish resort city of Antalya on Monday, Mevlut Cavusoglu noted that the international system is going through radical changes, adding that Türkiye has gone from being a regional actor to a global power with its balanced, active and conscientious foreign policy.
"The weakening of Europe as a continent is not in our favour, it is also against our economic interests. It is important for all of us in terms of Europe's stability," he emphasised.
Pointing to Türkiye's "leading position" in the world with its active mediator role, Cavusoglu cited its productive work in the Russia-Ukraine conflict and Kosovo-Serbia dispute, and all over the world, including Somalia, the Philippines, Palestine, and Venezuela.
Türkiye is both a European country and an Asian country, the foreign minister stressed, adding that Ankara has shifted its attention to Europe as a continent going through a difficult period.
"Therefore, it is inevitable for us to attach importance to Europe, which we are a part of when it needs us. This should not only be perceived as Türkiye's (ongoing candidacy for) membership in the EU. Europe is not just the EU, we’re talking about a greater Europe," he said.
Adding that Türkiye, as a regional and global actor, is part of Europe and needs to help overcome crises on the continent, he said: "Let's not hope for the weakening of Europe."