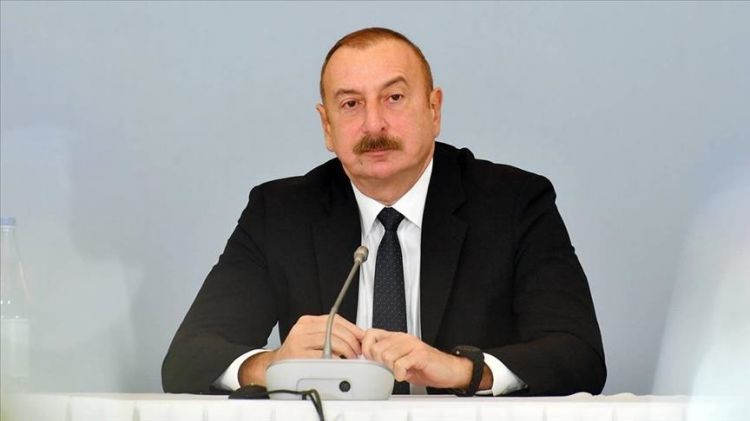 A planned peace meeting next month between Azerbaijan and Armenia has been called off over Armenia’s insistence on involving France, Azerbaijan’s president said on Friday.
The planned Dec. 7 meeting with Armenian Prime Minister Nikol Pashinyan in Brussels will not be held, said Ilham Aliyev, addressing a conference in the capital Baku.
According to Aliyev, Pashinyan had said that Armenia would only take part at the meeting if French President Emmanuel Macron also takes part in the talks, an insistence Aliyev called "an attempt to disrupt the peace talks.”
Aliyev said that Hikmet Hajiyev, his assistant and foreign policy chief, told him on Thursday that they had a call from the office of European Council President Charles Michel conveying Pashinyan’s request for Macron to be involved in the meeting.
Aliyev said that just a week before the meeting in Prague, Macron criticized Azerbaijan in an interview, accusing it “of things we didn't commit.”
“Later, the completely unacceptable and insulting bill of the French Senate was passed,” he said, adding that the French National Assembly is expected to “adopt another anti-Azerbaijani bill.”
Last week, Azerbaijan rebuffed a French Senate resolution calling for sanctions against Baku and its withdrawal from territory liberated from Armenian occupation in 2020.
“Then there was the French attempt to attack us through the Francophonie Summit (in Tunisia). This is unacceptable because Francophonie is a humanitarian organization,” he added.
Last week, Azerbaijani officials walked out of the francophone country summit over "distorted, provocative statements" against Azerbaijan in a draft of the summit’s declaration.
Saying that a preliminary version of the French bill, “prepared jointly by France and Armenia,” is “full of accusations and fabrications,” Aliyev said this clear bias makes Paris’ involvement in the talks impossible.
“This is their fault, not ours. Because neither the US nor Russia have ever been an official party (to the conflict),” he said.
Aliyev said that Yerevan’s request for French participation at the talks “means that the Dec. 7 meeting will not take place” and that Baku will consider “other alternatives.”
“Let's see who will take the role of mediator and on what platform it will take place,” he added.
After a Russia-brokered deal ended the fall 2020 war between Armenia and Azerbaijan over Karabakh, the three countries agreed to develop economic ties and infrastructure for the benefit of the entire region.
During the 2020 war, Azerbaijan liberated several cities and nearly 300 settlements and villages in the Karabakh region that had been occupied by Armenia for nearly three decades.