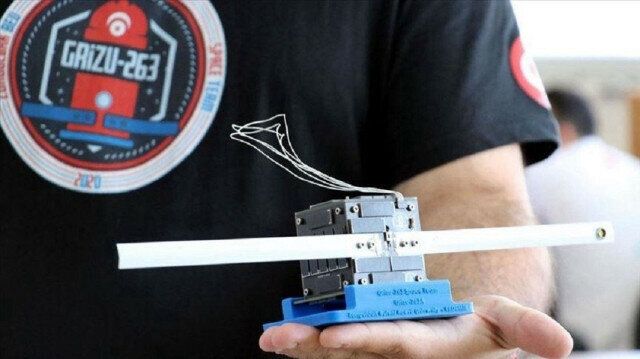 Turkey's first mini satellite, Grizu-263A, designed by the Grizu-263 Space Team, comprising students from the Engineering Faculty of Zonguldak Bulent Ecevit University (BEU), will be launched into space on Jan. 13 with SpaceX’s Falcon 9 rocket.
Bulent Ekmekci, counselor to the Grizu-263 Space Team, told the media that the team has achieved significant successes at the national and international levels during the process.
“We are happy that years of hard work will now come to fruition. Our mini satellite has been designed, integrated into the rocket, and is now awaiting launch,” he said, adding, “We look forward to the new horizons that will open for our team and our city with the success of this project.”
Established in 2016 by the BEU students in the Black Sea province of Zonguldak, Grizu-263 aims to work on space and satellite technologies and participate in international competitions.
The team was named after a firedamp explosion that killed 263 miners in the Kozlu district in 1992. The Turkish word for firedamp is grizu.
The project is carried out with the technical support of the Istanbul Technical University Space Systems Test Laboratory, as well as the Amateur Satellite Technologies Association of Turkey and TU Delft University.
The space team members are looking forward to the day when the cube satellite of 5x5x5 centimeters (2x2x2 inch), which they prepared with the "Turkey's first pocket-cube satellite" project, will be launched into space.
The satellite is designed to operate in a low earth orbit of roughly 525 kilometers for four years and eight months.
PocketQubes minimize rocket launch costs, production time, and potential satellite damage, offering the producer an advantage in space technologies.
In its inaugural year, the eight-person team participated in the American Astronautical Society's CanSat model satellite competition, which was sponsored by NASA, Lockheed Martin, Kratos Space, Praxis Inc, Siemens, and the US Naval Research Laboratory.
Grizu-263 finished 25th out of 96 teams in the competition, which is regarded as the most prestigious student competition in the model satellite field worldwide.
Grizu-263 finished second in their second attempt at CanSat.
In addition to CanSat, the team created a unit with some members to compete in the Teknofest Turksat Model Satellite Competition in Turkey, where they placed first. President Recep Tayyip Erdogan presented them with the award at Teknofest.