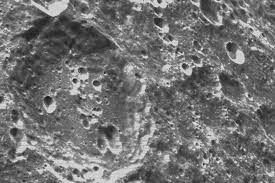 NASA's Artemis I Orion spacecraft's camera snapped some stunning new images of the moon and its crafters this week.
Using the Optical Navigation Camera on the sixth day of the mission, the black-and-white images highlight billions of years of history.
"Orion uses the optical navigation camera to capture imagery of the Earth and the moon at different phases and distances, providing an enhanced body of data to certify its effectiveness under different lighting conditions as a way to help orient the spacecraft on future missions with crew," NASA said in a caption alongside the photos.
Scientists have learned about the conditions of our early solar system by studying the composition, size and distribution of the craters, created long ago by collisions with asteroids.
Orion flew just over 81 miles above the lunar surface during its closest approach on Monday morning, traveling at 5,102 mph.
At the time of the lunar flyby, the spacecraft was more than 230,000 miles from Earth.
Using the European Service Module, Orion is currently preparing for a critical maneuver that will send the capsule into a high and "distant" orbit around the moon.