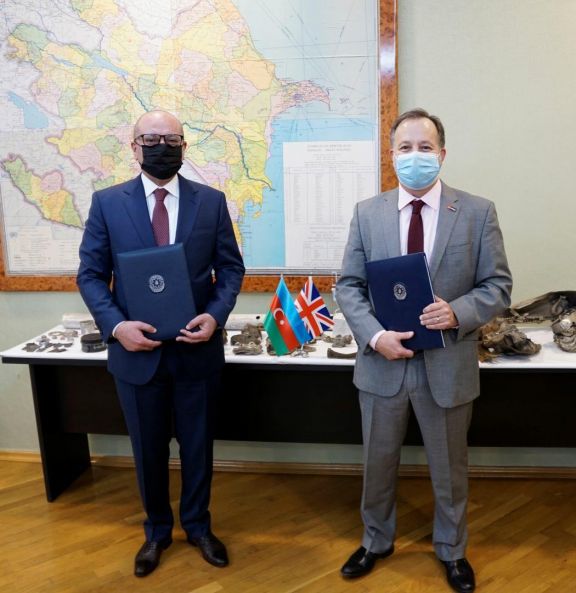 Azerbaijan's Mine Action Agency and British NGO Mines Advisory Group have signed a memorandum of understanding.

Under the memorandum, the British organization will hold training courses for new supervisors of the Mine Action Agency. It is also planned to render consulting services on the issues of mine clearance, Azerinews reports.

At the same time, it is expected to support the theoretical and practical training of the main supervisory staff of the Agency, the process of monitoring and evaluation.

"The cooperation between the Mine Action Agency for Mine Action and Mines Advisory Group will also support the delivery of information to the international communities on the scale of the mine problem in Azerbaijan," the Agency noted.

Earlier Emergencies Minister Kamaladdin Heydarov said that Azerbaijan is negotiating the purchase of robots for mine clearance.

Noting that the work on clearing the liberated territories from mines continues, Heydarov emphasized that the transferred maps of minefields are inaccurate.

"By the Azerbaijani president's order, a de-mining regiment was created. De-mining robots will also be purchased, and negotiations are already underway on this issue. In addition, specially trained dogs are prepared," he said.

It should be noted that Azerbaijan’s Mine Action Agency (ANAMA), along with the partner countries, carries out demining activities on the country's liberated territories.

Armenia deliberately and constantly planted mines on Azerbaijani territories, in violation of the 1949 Geneva Convention, thereby being a major threat to regional peace, security and cooperation.

Armenia submitted to Azerbaijan all mine maps of Azerbaijan's liberated territories as a result of talks held through the Russian Defence Ministry's mediation on December 4, 2021.

On December 12, Foreign Minister Jeyhun Bayramov told reporters that mine maps provided by Armenia so far are not fully accurate.

"New minefield maps given by Armenia are being analyzed by the experts. It will take time. We can prevent the growing number of deaths as a result of mine explosions," he said.

On December 9, the Prosecutor-General's Office has reported that 29 civilians and seven military servicemen were killed, as well as 109 servicemen and 44 civilians received injuries of varying severity as a result of mine explosions in the country’s lands since November 10, 2020.

Azerbaijan and Armenia signed a Russia-brokered peace agreement on November 10, 2020, to end 44 days of fighting and work toward a comprehensive resolution.