When Real Madrid or Barca knock on the door the other clubs must tremble - Guardiola on Sterling transfer
Read: 313

U.S. withdrawal from Syria will give Bashar al-Assad, Iran and Russia freer rein to subdue opposition forces. But also, Assad will feel emboldened to act with greater impunity and brutality. 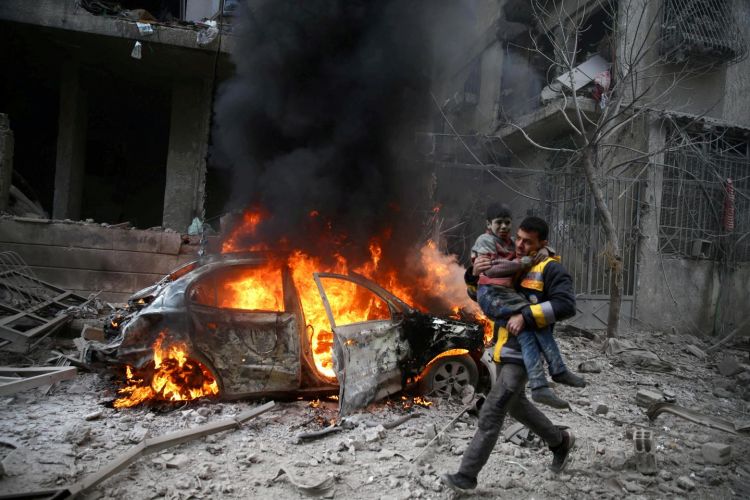 President Donald Trump’s decision to withdraw U.S. troops from Syria reverses his administration’s recent policy of retaining them as long as Iranian troops stay. Absent a major stake in Syria, America might shy away from a leading role in international efforts to achieve a negotiated political settlement, perhaps dooming prospects for one. Continued instability in Syria may favor Iran’s long-term interests there but perhaps not Russia’s.

Making good on an earlier pledge, President Trump tweeted in mid-December, “We have defeated ISIS in Syria, my only reason for being there.” While the announcement took allies and many in Congress by surprise, most expected a U.S. pullout someday.

The U.S. presence in Syria is modest, with only some 2,200 U.S. special forces, whose role is to advise and support much larger numbers of Syrian Kurdish and Arab fighters. This coalition has brought stunning success. In 2014, the Islamic State controlled over thirty-four-thousand square miles in Syria and Iraq, with eight million people subjected to brutal rule. Today its control over territory is vanishing—Islamic State fighters remain holed up the Hajin pocket and other small towns and villages along the Central Euphrates River Valley—currently less than 1 percent of what the caliphate held at its peak. Many armed insurgents will fight on, but probably not in organized formations on the battlefield, unless U.S. withdrawal prompts an Islamic State resurgence in Syria.

Last week, UN-led talks on a political settlement in Syria once again failed . Iranian, Russian and Turkish foreign ministers, meeting with the UN special envoy for Syria, Staffan de Mistura, failed to make progress on a way to reform Syria’s constitution and usher in new elections. Syrian President Bashar al-Assad’s regime is strongly resisting this process and so far, at least, Moscow has failed to compel him to accept it. Negotiations in this narrow format may have reached a dead end.

This is nothing new. A few years ago, Assad refused to implement multiple ceasefires negotiated by former Secretary of State John Kerry and Russian foreign minister Sergei Lavrov, while a meek and chastened Kremlin stood aside.

Iran, Russia and Turkey lack the negotiating experience and international clout required to craft and implement a political solution to such a complex, large-scale conflict. A wider effort involving great powers (America, China, Europe, Russia) and regional powers (Egypt, Gulf states, Jordan, Turkey) may be required to orchestrate and finance it.

With a patchwork of rebel groups still fighting throughout Syria, the country is likely to remain a conflict zone long after any negotiated political settlement is reached. Organizations like ISIS, Hayat Tahrir al-Sham (a Salafist jihadist militant group) and those linked to Al Qaeda will likely never recognize the political legitimacy of Assad.

Some Russian leaders are crowing about the U.S. pullout. One says it will “ only help stabilize the situation in Syria,” while another says America is “selling out the Kurds.” Even though most pundits claim U.S. withdrawal from Syria is a victory for Russian president Vladimir Putin, Russians might want to exercise more caution in their assessments.

It is true that U.S. withdrawal will give Assad, Iran and Russia freer rein to subdue opposition forces. Assad will feel emboldened to act with greater impunity and brutality, and resist any settlement that does not favor his regime.

Absent a peace deal, however, some Gulf states and others may fuel continued insurgencies in Syria, perhaps leaving it unstable for a long time. Even if the Assad regime manages to consolidate control over major cities and economic hubs, the rural Sunni heartland of eastern Syria will likely remain ungoverned space.

To secure it and control oil wells there critical to financing his regime, Assad must rely on Iranian and Hezbollah forces. At present, his regime cannot project power into rebel-held areas, and few government-security forces help police the territory.

Long-term insurgencies could jeopardize Moscow’s hope of a stable and friendly Syria that would allow it to have naval and air bases that are secure against insurgent attack and capable of heightening the threat to the U.S. Sixth Fleet and other NATO forces in the eastern Mediterranean region. The Kremlin seems to fear that pressuring Assad now could put this great power vision at risk.

Continued instability in Syria may also deter Europe from offering major economic reconstruction aid, leaving Russia (and Iran) vulnerable to criticism in much of Syria for causing war damage but not helping to rebuild afterward.

In 2015 President Barack Obama warned that Russia may find its military role in Syria to be a “ quagmire.” This may be more likely if America walks away from Syria or a political settlement remains out of reach.

Colin Clarke is Senior Research Fellow at The Soufan Center and an adjunct senior political scientist at the nonprofit, nonpartisan RAND Corporation.

William Courtney is an adjunct senior fellow at RAND and was U.S. ambassador to Kazakhstan, Georgia, and a U.S.-Soviet commission to implement the Threshold Test Ban Treaty.