The new Russian Su-34 will be able to detect and shoot down invisible targets - VIDEO
Read: 1343

Putin - 'We see how an array of Western countries are resorting to pressure, intimidation and blackmail of sovereign African governments'
Read: 1170 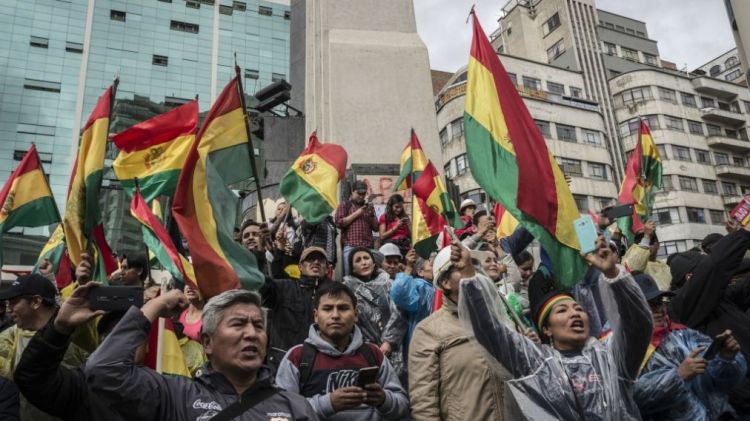 Bolivian people rose up against as a response to victory of President Evo Morales in 2019 general elections. Evo Morales won elections fourth time in a row. Protests claims electoral frauds during the elections and called Morales's victory as invalid.

Protests turned violent against members of the ruling party and their families. In the processes, the police and army joined protesters and demanded Morales's resignation on the 10 th November.

Morales fled from Bolivia and obtained asylum in Mexico.

Venezuelan political analyst Jose Chalhoub expressed his views in the Bolivian protests in his exclusive commentary to Eurasia Diary. Jose Chalhoub is a Venezuelan political risks and oil consultant in Venezuela with focus on Russia, South america and the Middle East geopolitics.

Primarily he explained the reason for unrest:

"Despite the positive status of social and economic indicators during his tenure of around 14 years in power (significantly thanks to Venezuelan aid and funding under former president Chavez) people took to streets in rejection of a fraud committed by Evo Morales in last presidential elections and his attempts to perpetuate in power without checks and controls."

As it is reported, similar protests having unfolded in Venezuela earlier this year. J. Chalhoub gave his considerations about the similarities between two protests of Latin American countries.

"Looking back in the past years, people in Bolivia were protesting against a political ideology in many ways and autocratic desires by Morales due to his links to the Bolivarian revolution," he said.

Political analyst thinks that the main key difference that led to the demise of Evo Morales is that it counts with the final backing of the armed forces and police institutions unlike the situation of these forces in Venezuela which in different ways still show its support and cohesion for the Bolivarian Revolution. He also mentioned the possibility of intervention of outside powers in the protests.

"The influence of the US but also the influence of outside powers recently arrived in Bolivia should not be discarded. The quest for power and positioning in South America has been fierce in the last years. But the intervention and mechanisms are completely different especially now with the resurgence of leftists governments in Argentina and the critical situation in Chile, Brazil, Colombia and Ecuador to name the most recent close to the US."

"Overall in Bolivia as well as in the rest of the continent the discontents will continue to exist and reflected in these violent and also peaceful protests as long as the current socio-political model is not reformed. Additionally the current leadership does not apply adequate measures to address the deep inequalities that are characteristic in Latin America especially with negative economic and financial outlooks for 2020 being the region a net exporter and reserve of raw materials and commodities," Jose Chalhoub concluded.