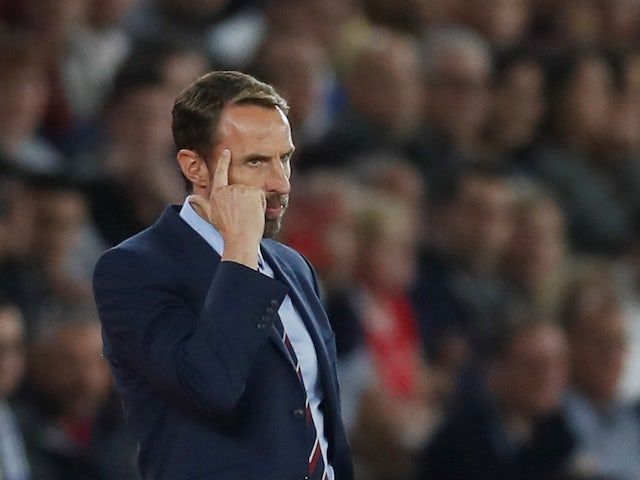 Gareth Southgate will consider returning to the three-man defence England used at the World Cup in the wake of Friday's loss to the Czech Republic.

Frailties were exposed in a 2-1 defeat that prevented the Three Lions from booking their place at Euro 2020 as Michael Keane in particular struggled behind a midfield pairing of Declan Rice and Jordan Henderson.

The poor showing in Prague has forced manager Southgate to rethink his move away from the formation that served him well in Russia.

Harry Maguire, John Stones and Kyle Walker, now dropped from the squad, formed a reliable back three en route to the semi-finals.

"It's certainly something we've considered and I don't think we can dismiss," Southgate said.

"I think we are in a difficult situation in terms of the players that have played international football with us in that area of the pitch and who are playing regularly with their clubs.

"That's part of the reason we didn't [play a three-man defence against the Czech Republic].

"I'm not sure, ahead of Monday, if that's the right thing to do but we're very aware and assessing those things."

Amendments to the midfield shape are more likely for Monday's game against Bulgaria after Rice and Henderson failed to convince in the engine room of a new-look 4-2-3-1.

Tottenham's Harry Winks could win a promotion to the starting XI in Sofia.

Southgate said: "He has to be in consideration, and we've got to assess one or two injuries as well.

"We've got some good players in the squad and the performance in Prague certainly wasn't at the level we needed.

"So, of course, we've got to think about where we might want to make those changes.

"We tried to change shape in the first half and it didn't work as well as we hoped, so we changed it and we started better in the second half and had good chances to win the game.

"But we conceded too many poor chances and conceded possession too often.