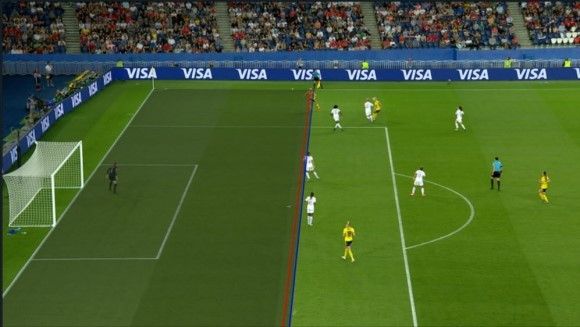 The use of technology to help officials detect offside more accurately is being trialled at the Arab Cup, which starts today in Qatar.
‘Semi-automated offsides’ work using between 10 and 12 cameras and a dedicated offside video assistant.
FIFA’s Chief Refereeing Officer Pierluigi Collina said the Arab Cup represented the offside rule’s most important trial so far.
“VAR has had a very positive impact in football and the number of major mistakes is reduced, but there are areas where it can be improved – and offside is one of them,” said Collina.
The technology provides the Video Assistant Referee with information before the on-field official takes a final call.
“We’ll have a camera setup installed under the roof of each stadium,” said FIFA’s Football Technology and Innovation Director Johannes Holzmueller.
“The limb-tracking data extracted from the video will be sent to the operations rooms and the calculated offside line and detected kick-point is provided to the replay operator in almost real time.
“The replay operator then has the opportunity to show it immediately to the VAR. At the FIFA Arab Cup the assistant VAR at a dedicated offside station can immediately validate and confirm the information.”
The game has seen multiple contentious offside calls since the introduction of the VAR, with growing concern about the time taken and the precision with which offsides are judged.
FIFA’s Chief of Global Football Development Arsene Wenger said in April that he hoped the semi-automated system can be used at next year’s World Cup.