Putin - 'We see how an array of Western countries are resorting to pressure, intimidation and blackmail of sovereign African governments'
Read: 1049

Pope writes to Assad, calling for reconciliation and protection of civilians

The Pope’s letter was delivered to the Syrian president this morning. “The Holy See has always insisted on the need to seek an appropriate political solution to end the conflict, overcoming partisan interests,” said Card Pietro Parolin. 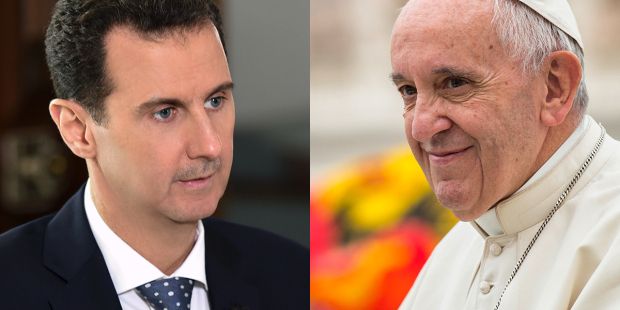 In the missive, the pontiff calls for the protection of civil lives, and the preservation of the country's main infrastructure, such as schools and hospitals, expressing profound concern “for the humanitarian situation in Syria, with particular reference to the dramatic conditions of the civilian population in Idlib,” said Matteo Bruni, the new Holy See Press Officedirector, in a statement.

Speaking to Vatican News, Card Parolin said that "What is happening is intolerable and inhuman. The Holy Father asks the President to do everything possible to put an end to this humanitarian catastrophe, in order to protect the defenceless population, especially those who are most vulnerable, in respect for international humanitarian law.”

“The Pope follows with apprehension and great sorrow the tragic fate of the civilian population, children in particular, caught up in the bloody fighting. Unfortunately, the war grinds on – it has not ended: the bombings continue, various health facilities have been destroyed in that area, while many others have had to suspend their activities, either completely or partially.”

“In his letter, the Holy Father uses the word ‘reconciliation’ three times: this is his objective, for the good of that country and its defenceless population. The Pope encourages President Bashar al-Assad to carry out significant gestures in this urgent process of reconciliation, and he offers concrete examples. He cites, for example, creating the conditions needed for the safe return of exiles and internally displaced persons, and for all those who wish to return to the country after having been forced to leave. He also mentions the release of prisoners and the access of families to information about their loved ones.”

“Pope Francis is particularly concerned about the situation of political prisoners, to whom – he affirms –humane conditions cannot be denied.”

“The Holy See has always insisted on the need to seek an appropriate political solution to end the conflict, overcoming partisan interests. And this must be done using the instruments of diplomacy, dialogue, and negotiation, along with the assistance of the international community. We have had to learn once again that war generates war and violence incites violence – as the Pope has said many times, and as he repeats also in this letter.

“Unfortunately, we are concerned about the stalemate in the negotiation process – especially that seen in Geneva – for a political solution to the crisis. That is why, in the letter sent to President Assad, the Holy Father encourages him to show good will and to work towards finding viable solutions, putting an end to a conflict which has lasted far too long and which has led to the loss of numerous innocent lives.”