daily news
First meeting of China-Central Asia Foreign Ministers set for July 16
North Macedonia votes as EU talks loom
Enemy’s military transport facility destroyed in Nakhchivan direction - Azerbaijani MoD - VIDEO
Heroism of our servicemen who died for the motherland will never be forgotten - Azerbaijani President
Waging another War against Azerbaijan is not a panacea, or why Armenia should stop its provocation
Kremlin says situation with Belarusian election domestic affair
1 killed and up to 35 injured after two trains collide near Czech capital
China vows retaliation after Trump ends preferential status for Hong Kong
﻿

The loss of the four young men is extremely sad and we share grief of their families – British journalist
Read: 2162

Over thousands of Azerbaijani youth who support the Turkey’s Peace Spring operation in Syria demonstrated their deep intention to join the Turkish army. 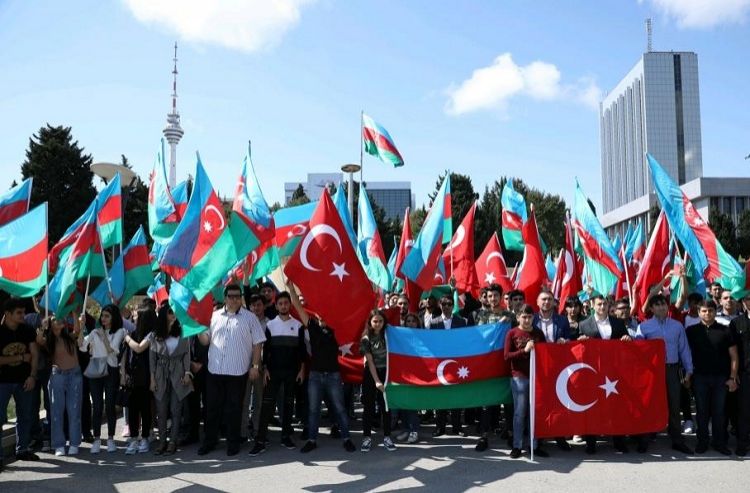 Emin Hasanlı, Member of the Support Council of the Presidency of Civil Society Organizations of Azerbaijan Republic, stated that more than a thousand Azerbaijani young people have voluntarily applied to join the Turkish army.

"Azerbaijani veterans, retired military officers, families of martyrs, our young people and Azerbaijan's NGOs wholeheartedly support Turkey's military operations in Syria. We hope that the victorious Turkish army will achieve victory in the shortest time without victims. Azerbaijani veterans and young people want to fight during the Turkish army. We always stand by Turkey as brothers of his army. May Allah have mercy on our martyrs, and their place be heaven. I wish our veterans long life and peace. May Allah grant everlasting victory for the Turkish army."