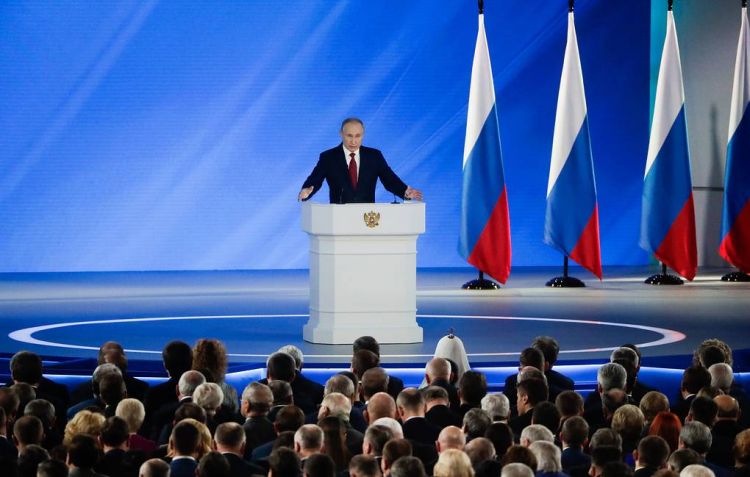 "Given that the proposed reforms concern significant changes to political system, the work of legislative, executive and judicial authorities, I believe it is necessary to hold a plebiscite on the entire package of the proposed amendments to the Russian Constitution," Putin said in his annual State of the Nation Address to the Federal Assembly.

At the same time, Putin said that he sees no grounds to adopt new constitution in Russia.

Putin also offered to accord priority to the Russian Constitution within the Russian legal space.

"It is time to make some changes to the fundamental law of the country, which would guarantee the priority of the Russian Constitution in our legal space. What does this mean? It means that requirements of international law and decisions of international bodies can only be enforced in Russia to such an extent that does not violate human and civil rights and freedoms and does not violate our Constitution," Putin said.

A united system of power

Putin has also offered to incorporate principles of a united system of power in the Russian constitution in order to avoid discrepancies between government and municipal bodies.

"I think it necessary to incorporate the principles of a united system of public government in the Constitution, building effective cooperation between state and municipal bodies," Putin said. The president noted that real powers of local governments "must be expanded and reinforced."

He pointed out a divide between state and municipal bodies of power, noting that this "entanglement of powers" affects people negatively, leading to issues in the sphere of education, healthcare and other areas. "Shared rights, freedoms and guarantees stipulated in the legislation are enforced differently in different regions and municipalities," the Russian leader noted, adding that this situation is unfair to Russian citizens, carrying a direct threat to the Russian society and the country’s integrity.

"Our goal is to ensure a high standard of living, equal opportunities for every person on the entire territory of the country," Putin concluded, noting that all national projects and development plans are aimed to achieve this objective.