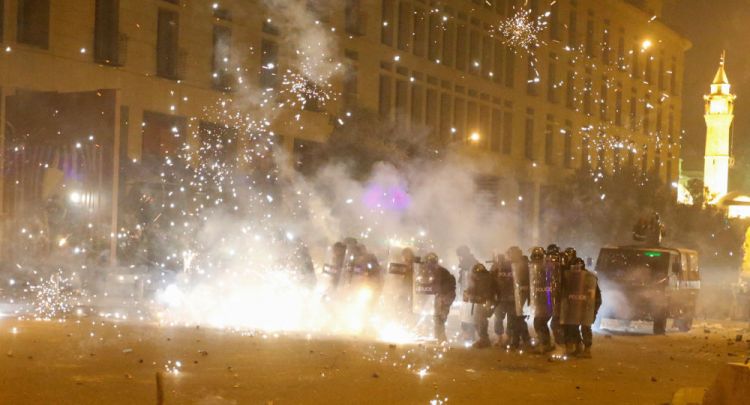 Small groups of protesters are still in the city centre, and the anti-government rally is currently continuing in a peaceful manner.

The demonstrators demand dissolution of parliament and early elections, formation of a new independent government and implementation of fair economic reforms.

Security officers, who were injured in clashes with protesters, were attacked after being taken to hospitals, the country's interior ministry said in a statement.

"Injured internal security officers were attacked by a number of rioters at Alwardiyah Hospital and American University of Beirut Medical Center," the statement says.

A video published on social networks shows a group of people attacking people in police uniforms, whom doctors help get out of ambulances near the entrance to the hospital.

Protesters from across Lebanon flocked to Beirut earlier in the day to attend a rally against economic mismanagement and weakening national currency, dubbed "Saturday of outrage."

Clashes with law enforcement ensued as protesters attempted to storm the parliament building's fences. More than 165 people were injured in clashes, according to the Lebanese Red Cross. Lebanese President Michel Aoun has ordered the army to the capital to protect peaceful protesters and keep the situation under control.

Mass protests engulfed Lebanon last October amid a crippling economic crisis. People have been demanding urgent reforms to end the deepening liquidity crisis, which the country’s president has blamed on sanctions. The resignation of Prime Minister Saad Hariri's government last fall failed to remove people from the streets. In absence of a new cabinet ever since, the Lebanese saw their national currency devaluing. The Lebanese pound fell more than 60 percent against US dollar over the period.