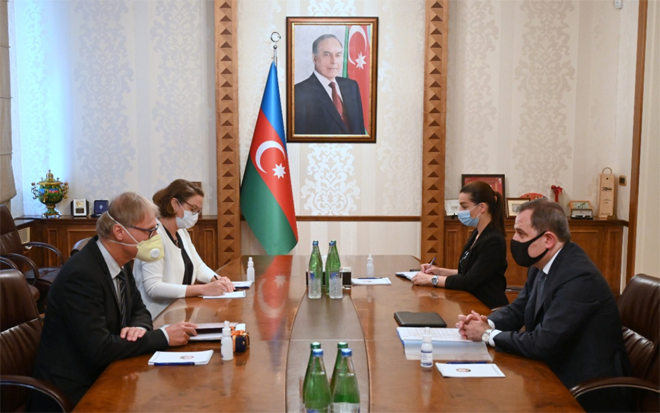 Azerbaijani Foreign Minister Jeyhun Bayramov received German ambassador to Azerbaijan Wolfgang Manig, the Azerbaijani Foreign Ministry told Trend on July 30.
During the meeting, the sides exchanged the views on the development of cooperation between Azerbaijan and Germany in several spheres, including the economic, trade, humanitarian and cultural spheres.
Bayramov informed Manig about Armenia’s occupation policy against Azerbaijan, which is a threat to security in the region, recent military provocation committed by the Armenian armed forces on the state border of the two countries, as well as about the current situation in the region.
The statement was made that the contradictory statements and actions of the Armenian leadership, as well as the recent planned provocation, are a big blow to the negotiations on the peaceful settlement of the Armenia-Azerbaijan Nagorno-Karabakh conflict.
Stressing that Azerbaijan supports substantive negotiations aimed at a specific result, the minister stressed that Azerbaijan will never reconcile with the occupation of its territories and the negotiations must serve to eliminate the consequences of the occupation.
Manig expressed gratitude for the warm welcome and delivered a congratulatory letter addressed to Bayramov by German Foreign Minister Heiko Maas.
The confidence was expressed during the meeting that the cooperation between the two countries in various fields will develop in the future.
The parties also exchanged the views on other issues of mutual interest.