UNESCO Renews to Hayat Sindi as a Goodwill Smbassador 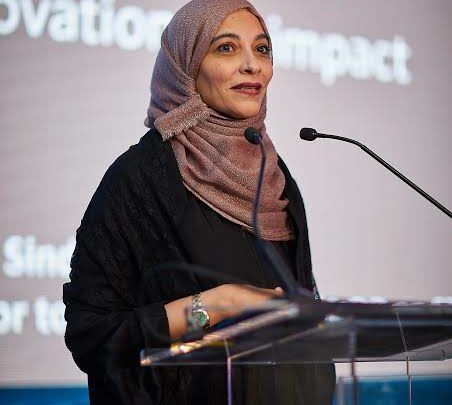 Ashraf AboArafe
Jeddah 4 August 2020
Audrey Azoulay, UNESCO Director-General, has decided to renew the appoint Dr Hayat Sindi as a UNESCO Goodwill Ambassador for another two-year period. This title was bestowed upon Dr Sindi in recognition of her work to create an ecosystem of entrepreneurship and social innovation for scientists, technologists and engineers in the Middle East and beyond, her efforts to bring the youth closer to innovators and to promote Science technology Engineering and Mathematics education and her dedication to the ideals and aims of the Organization. She is the first woman from the Gulf to obtain a Ph.D in biotechnology from the University of Cambridge.
Dr. Sindi, who was one of the first ladies to join the Saud Shoura Council, is a Biotechnology researcher who was born in Makkah, KSA. Her remarkable career includes co-founding and co-inventing ‘Diagnostics For All’ – a programme to create to affordable diagnostic devices for millions of people in impoverished regions. alongside a team from Harvard University. These innovative, inexpensive, point-of-care diagnostic devices require no power, water or trained doctors and have the ability to provide potentially life-saving medical results in minutes. In 2008 Dr Sindi led the ‘Diagnostics For All’ business team to first place in Harvard Business School’s Business Plan Contest, in the social enterprise track, and also to first place in MIT’s $100K Entrepreneurship Competition in the same year. (The first time in history that the same team won first place in both competitions in the same year).
She founded the i2 institute that seeks to empower and inspire the next generation of innovators so that they may realize their dreams and ultimately contribute to the world. She has also invented a low-cost diagnostic tool for early detection of breast cancer by converting light into sound and holds nine patents. Her work encouraging innovation and entrepreneurship among young people was recognized, when she was awarded the Clinton Global Citizen Award for “Leadership in Civil Society.”
In 2017, Dr Sindi was appointed Chief Scientific Advisor to the President of the IsDB. In this role, she has put Science, Technology and Innovation (STI) at the heart of Islamic Development Bank’s work, where it is a powerful driver of economic growth and sustainable development. She has contributed to the launch of the IsDB’s $500m Transform Fund and Engage platform to support innovators find solutions to development challenges through the power of innovation, the first digital hub of its kind for the developing world.
Dr Sindi has appeared on several prestigious lists. She was selected as one of Newsweek’s “150 Women Who Shake the World”. She was ranked by Forbes as Number 2 in’ list of the most powerful Arab women in Kingdom of Saudi Arabia and was again selected by Newsweek and The Daily Beast as one of ‘150 Fearless Women’. In 2018, she was named among the 100 inspiring and influential women from around the world of the BBC.
Dr Sindi has served on several United Nations panel and expert groups. She was selected in 2013 as one of 25 global experts selected by United Nations (UN) Secretary General Ban Ki Moon to be a member of the UN Scientific Advisory Board, which provides advice to the UN’s leadership on science, technology and innovation for sustainable development. She was appointed in 2015 as an honorary Advisor to the UN Environment Programme for the Eye on Earth Summit and was appointed in 2016 by the UN Secretary-General Ban Ki-moon as one of a 10-member group to support the technological facilitation mechanism (TFM) for the Sustainable Development Goals.
Recently, Dr Sindi has been appointed by the G20 to become the Global Ambassador for the Health and Development Partnership of the Group.