Azerbaijan has right to use its armed forces to take back its legally acknowledged territory - British journalist
Read: 2477 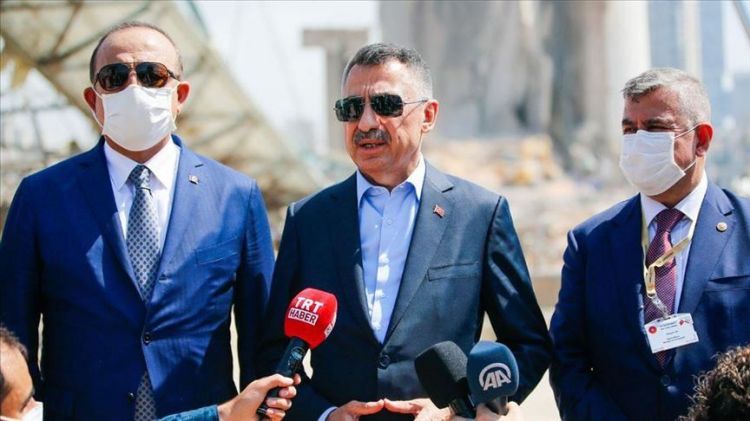 Fuat Oktay, who is visiting the Lebanese capital along with Turkish Foreign Minister Mevlut Cavusoglu, said all of Turkey’s hospitals and air ambulances are at Lebanon’s service, as the country deals with the devastating fallout of Tuesday’s massive blast at the port of Beirut.

Speaking after a meeting with Lebanese President Michel Aoun, Oktay said Ankara has told Lebanon that it can use Turkey’s Mersin port until the Beirut port is rebuilt.

“Turkey is ready to help rebuild the heavily damaged Beirut port and nearby buildings,” the vice president said.

Oktay and Cavusoglu met Lebanese Prime Minister Hassan Diab, who took them to the site of the explosion.

The Turkish officials conveyed their condolences for the loss of life and property, and reiterated Ankara’s willingness to help out in all aspects.

“Our aid agency TIKA [Turkish Cooperation and Coordination Agency] came here immediately and brought around 400 tons of wheat to the Tripoli port [in northern Lebanon] to help with the food shortage. We also brought medicines and medical equipment,” Oktay said.

He said the pandemic still poses a threat and Turkey will continue its support to limit the pandemic’s impact.

“We have delivered respiratory devices as well. We will continue bringing in more aid over the days to come,” the Turkish vice president added.

Diab said he was sure that Turkey will do everything in its power to help Lebanon through this tough time.

He added that the Turkish ambassador to Lebanon Hakan Cakil was also part of the crisis committee formed after the explosion.