Turkey not involved in Armenia conflict 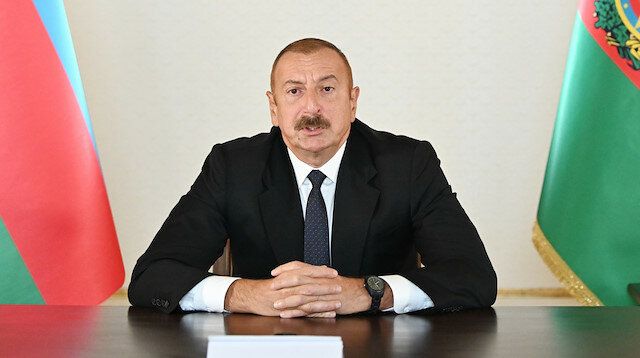 Turkey is not a party to Azerbaijan’s conflict with Armenia and is only providing moral support to Baku, Azerbaijan’s president said Tuesday, Yeni Safak reports.

“Rumors being spread by Armenia that Turkey is involved in the conflict are provocative,” Ilham Aliyev told the Russian "60 Minutes" program aired on the Rossiya-1 TV channel.

Aliyev and Armenian Prime Minister Nikol Pashinyan responded to questions from the hosts.

"The role of Turkey is intended to stabilize the situation in the region. Turkey is our brother country and our ally," Aliyev said, adding that as soon as the border clashes began, Turkish President Recep Tayyip Erdogan and other senior Turkish officials voiced support for Azerbaijan and international law.

He also thanked the Turkish nation for its support.

"The aim of Armenia is to insult the Azerbaijani army, which fulfills its duty with honor, by making such false reports and to create the impression that the conflicts have increased and third countries are getting involved in the issue," he said.

Ankara has also denied Armenia’s claim regarding the downed aircraft.

The Azerbaijani leader pointed out that clashes were continuing on the border and that the Azerbaijani army had liberated some settlements from occupation and seized strategically important heights.

Aliyev also denied allegations that fighters were brought to Azerbaijan from Syria to battle Armenian forces.

"This is another [piece of] fake news. There are no fighters from Syria. There is no evidence of this. This is Armenian propaganda spread over the internet and by different media outlets."

"With a population of 10 million versus 2 million in Armenia, we have enough human resources," he added.

Noting that the Azerbaijani army is well-trained and prepared, Aliyev emphasized that his country can defend its lands on its own.

Four UN Security Council and two UN General Assembly resolutions as well as many international organizations demand the withdrawal of the occupying forces.

The OSCE Minsk Group – co-chaired by France, Russia and the US – was formed in 1992 to find a peaceful solution to the conflict, but to no avail. A cease-fire, however, was agreed upon in 1994.

France, Russia and NATO, among others, have called for an immediate halt to clashes in the occupied region.