daily news
Two epochs are at war in Karabakh: - expert
Azerbaijani army continues fire at Armenian occupying forces - VIDEO
Armenian Foreign Minister is on official visit to Moscow
Units of the Armenian Armed Forces in the direction of Gubadli were destroyed - VIDEO
Azerbaijan says France is not neutral in Nagorno-Karabakh conflict
What is behind the Nagorno-Karabakh flare-up?
Armenian Diaspora prompted US to meddle in Karabakh conflict - expert
The city of Zangilan and 24 other villages were liberated from Armenian occupation
﻿

"The Azerbaijani community of Nagorno-Karabakh is ready to live with the Armenian population" - Hikmet Hajiyev
Read: 728

The city of Zangilan and 24 other villages were liberated from Armenian occupation
Read: 430 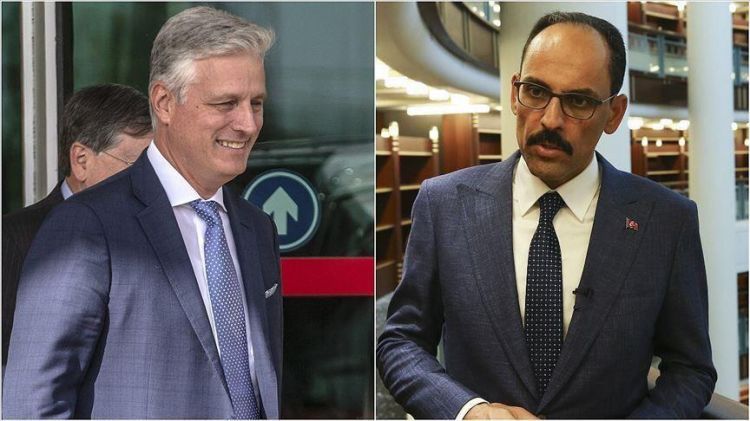 According to a statement by the presidential office, İbrahim Kalın told Robert C.  that Turkey would continue to support Azerbaijan’s territorial integrity and independence, and Armenia’s withdrawal from occupied territories was essential for regional peace and stability.

Four U.N. Security Council and two U.N. General Assembly resolutions, as well as many international organizations, demand the withdrawal of the occupying forces.

Regarding the Eastern Mediterranean dispute, the Turkish official said the U.S. administration should adopt an impartial and balanced position, adding Ankara’s constructive attitude, which paved the way for dialogue and cooperation, should not be left unanswered.

Also in the Eastern Mediterranean, tensions have been running high for weeks as Greece has disputed Turkey's energy exploration.

Turkey - the country with the longest coastline on the Mediterranean - sent out drill ships to explore for energy on its continental shelf, asserting its own rights in the region, as well as those of the Turkish Republic of Northern Cyprus.

To reduce tensions, Ankara has called for dialogue to ensure fair sharing of the region's resources.

The two officials also discussed the improvement in economic relations between the two countries.