Russia is developing a new armor for its armored vehicles
Read: 431

Red hypergiant as bright as 300,000 suns could explain what’s up with Betelgeuse
Read: 411

A planet close to us with a day that lasts forever and an eternal night lit up by exploding volcanoes
Read: 400

Kocharyan's main target and the results of negotiations in Moscow - not willing to spoil relations with Kremlin
Read: 383 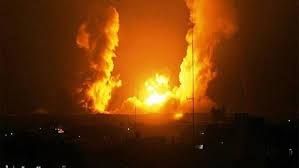 Some news sources claimed Tuesday morning that US fighter jets had attacked some positions in Iraq, but a Pentagon official denied the US attack hours later.

As Al-Mayadeen reported, the blasts were caused by an airstrike and the target area was the headquarters of the Iraqi Armed Forces.

Al-Mayadeen quoted his correspondent as saying that the US planes were flying in the al Qaim area on the Iraqi-Syrian border.

Initial reports claimed that the attack on Jurf al-Sakhar was carried out by US F-16 fighter jets.

Local sources say at least four explosions have occurred in the area.

The Iraqi Al-Ahad news reported that 9 Iraqi army members had been killed in the attacks.

However, a senior Pentagon official denied the reports in an interview with Fox News, saying that the United States had not carried out any attacks near Baghdad that night.

News sources did not provide further details about the alleged attack.