Russia is developing a new armor for its armored vehicles
Read: 437

A planet close to us with a day that lasts forever and an eternal night lit up by exploding volcanoes
Read: 402

France to form commission for reconciling with Algeria 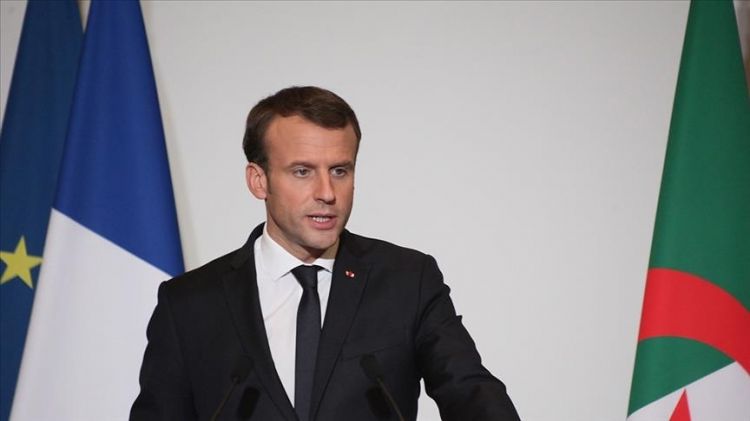 France will establish a “memories and truth” commission to bring in a possible memorial reconciliation with Algeria -- whose 132-year-long occupation ended with a brutal war in 1962 -- and undertake commemorative initiatives to honor lives of Algerians who fought in the war.
The commission will be headed by historian Benjamin Stora, who made the recommendation in a 160-page report on the memory of colonization and Algerian war, which was submitted Wednesday to President Emmanuel Macron.
France will also fully associate Algerians in commemorations on March 19, marking the end of the Algerian war and a tribute day to Algerian Muslims and other members of auxiliary formations in the Algerian war, and on Oct. 17 concerning the repression of Algerian workers in France.
The announcements were made by Macron’s office, Elysee on Wednesday in a statement which said the president “hoped these initiatives would allow our country to take a lucid look at the wounds of the past, to build, over time, a reconciliation of memories and to be turned towards the youth in France and Algeria, in an education and transmission process.”
The report addresses sensitive topics in particular relating to archives in France which Algeria wants to be returned, on the disappeared and missing persons during the war, but ruled out the question of apologies, a longstanding demand of Algerian authorities about the period of colonization. “In line with old French presidential speeches, this symbolic gesture can be accomplished by a new speech. But will this be enough?”
Stora said the passage to history to recognize the Algerian war “could take place thanks to the opening of new archives, in particular state, to the emergence of a new generation of researchers, and by the need to testify, on the life of a large number of actors involved in the conflict.”
The report presented a series of recommendations to address the enduring grievances, such as establishment of a mixed commission of French and Algerian historians highlighting the kidnappings and assassinations of Europeans in Oran in July 1962, and identifying the places where executed death row inmates were buried during the war.
Development of the four internment camps holding Algerians in Larzac (Aveyron), St-Maurice l'Ardoise (Gard), Thol (Rhone) and Vadenay (Marne) as places of memory, preservation of European and Jewish cemeteries in Algeria and maintenance of the tombs of Muslim Algerian soldiers who died for France lie neglected were included in the report as well.
It also suggests resumption of the joint working group on archives, continuation of joint work concerning the sites of nuclear tests in Algeria, university level cooperation for researchers on both sides, and re-activation of the Museum of the History of France and Algeria project planned in Montpellier and establishment of a Franco-Algerian Youth Office and commission of historians.
The report in addition calls for organizing initiatives, including an international conference this year dedicated to renowned personalities like Francois Mauriac, Raymond Aron, Jean-Paul Sartre, Andre Mandouze, Paul Ricoeur, who opposed the war of Algeria, as well as and an exhibition at the National Museum of the History of immigration on African independence with the construction of stone slab in Amboise of military leader Emir Abdelkader, who led the fight against the French colonial invasion to mark the 60th anniversary of Algeria’s independence in 2022 and restitution of his sword to Algeria.
Recognizing the assassination of lawyer Ali Boumendjel in 1957 and burying feminist lawyer and anti-colonialist Gisele Halimi who died in July last year at the Pantheon was among the report's recommendations.
Algerians have demanded in the past for France to acknowledge and apologize for the discriminatory practices and crimes committed during colonial rule in the country.
Based on estimates by Algerian historians, 1.5 million Algerians were killed during the course of their struggle for independence. French historians put this figure at 400,000 from both sides during the 1954-1962 Algerian War of Independence.