Apophis meteor will gently pass by Earth tonight - experts warn it could collide with our planet in future
Read: 5952 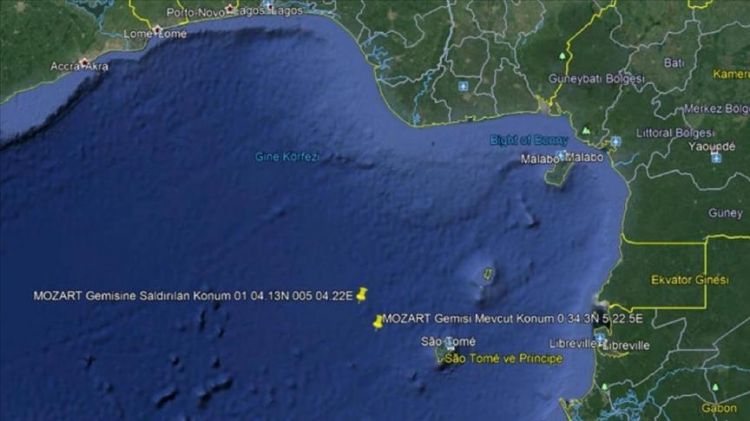 Turkey launched diplomatic efforts to find crew members that were kidnapped after a pirate attack on a Turkish cargo ship off Nigeria, according to diplomatic sources.

According to Anadolu Agency, Turkey's President Recep Tayyip Erdogan held a telephone conversation with Furkan Yaren, the fourth captain of the ship that was ambushed, the Presidential Communications Directorate said in a statement.

Erdogan received information that the ship was moving toward Gabon with three crew members, it said.

Closely following the process, Erdogan instructed authorities regarding the rescue of the ship’s personnel.

Foreign Minister Mevlut Cavuvoglu also talked to Yaren and received information about the incident and the situation on the ship.

Cavuvoglu spoke to Osman Levent Karsan, the operator of the company that owns the ship and conveyed his condolences, emphasizing that necessary actions will be taken to rescue the crew as soon as possible and return them safely.

Cavusoglu also had a telephone call with his Azerbaijani counterpart, Jeyhun Bayramov, and expressed his condolences for the crew member who was killed in the attack.

"Today, the owners and operators of the M / V MOZART ship, which was abducted at gunpoint in the Gulf of Guinea, have regretfully confirmed that one of its crew members was killed and the others kidnapped,” Istanbul-based Boden company said in a statement.

Company officials expressed condolences and support for the crew's families, it said.

They called for a sensitive approach to the rescue for the sake of crew members and underlined they were trying to solve the problem as soon as possible in the safest way,

Turkish embassies in surrounding countries, including Nigeria, have been mobilized for the crew, diplomatic sources added.

The ship is expected to arrive at Gabon's Port-Gentil at 9 a.m. local time in Turkey.

The Mozart was attacked by pirates early Saturday while one crew member was killed and 15 others kidnapped from the ship that had a crew of 19.

Fifteen crew members moving from Lagos, Nigeria to Cape Town, South Africa were kidnapped, while three remained with the pirates, David Johnson, the head of the UK-based EOS Risk Group had said in the statement.

Mozart was attacked in the Gulf of Guinea, 160 kilometers (100 miles) off Sao Tome, he added.

A tape recording had been shared on Twitter and believed to be belonging to the captain of the ship says: "I don't know where I'm going. The pirates dismantled all cables, nothing is working. Only the navigator works. They gave me a route, I'm moving accordingly."