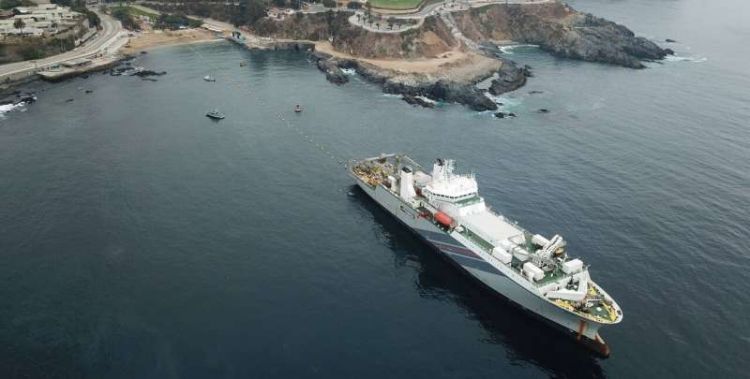 Seismologists at Caltech working with optics experts at Google have developed a method to use existing underwater telecommunication cables to detect earthquakes. The technique could lead to improved earthquake and tsunami warning systems around the world.

A vast network of more than a million kilometers of fiber optic cable lies at the bottom of Earth's oceans. In the 1980s, telecommunication companies and governments began laying these cables, each of which can span thousands of kilometers. Today, the global network is considered the backbone of international telecommunications.

Scientists have long sought a way to use those submerged cables to monitor seismicity. After all, more than 70 percent of the globe is covered by water, and it is extremely difficult and expensive to install, monitor, and run underwater seismometers to keep track of the earth's movements beneath the seas. What would be ideal, researchers say, is to monitor seismicity by making use of the infrastructure already in place along the ocean floor.

Previous efforts to use optical fibers to study seismicity have relied on the addition of sophisticated scientific instruments and/or the use of so-called "dark fibers," fiber optic cables that are not actively being used.

Now Zhongwen Zhan (Ph.D. '13), assistant professor of geophysics at Caltech, and his colleagues have come up with a way to analyze the light traveling through "lit" fibers—in other words, existing and functioning submarine cables—to detect earthquakes and ocean waves without the need for any additional equipment. They describe the new method in the February 26 issue of the journal Science.

"This new technique can really convert the majority of submarine cables into geophysical sensors that are thousands of kilometers long to detect earthquakes and possibly tsunamis in the future," says Zhan. "We believe this is the first solution for monitoring seismicity on the ocean floor that could feasibly be implemented around the world. It could complement the existing network of ground-based seismometers and tsunami-monitoring buoys to make the detection of submarine earthquakes and tsunamis much faster in many cases."

The cable networks work through the use of lasers that send pulses of information through glass fibers bundled within the cables to deliver data at rates faster than 200,000 kilometers per second to receivers at the other end. To make optimal use of the cables—that is, to transfer as much information as possible across them—one of the things operators monitor is the polarization of the light that travels within the fibers. Like other light that passes through a polarizing filter, laser light is polarized—meaning, its electric field oscillates in just one direction rather than any which way. Controlling the direction of the electric field can allow multiple signals to travel through the same fiber simultaneously. At the receiving end, devices check the state of polarization of each signal to see how it has changed along the path of the cable to make sure that the signals are not getting mixed.

In their work, the researchers focused on the Curie Cable, a submarine fiber optic cable that stretches more than 10,000 kilometers along the eastern edge of the Pacific Ocean from Los Angeles to Valparaiso, Chile. (Although Zhan says the technique could be used on many of the hundreds of submarine cables that criss-cross the globe.)

On land, all sorts of disturbances, such as changes in temperature and even lightning strikes, can change the polarization of light traveling through fiber optic cables. Because the temperature in the deep ocean remains nearly constant and because there are so few disturbances there, the change in polarization from one end of the Curie Cable to the other remains quite stable over time, Zhan and his colleagues found.

However, during earthquakes and when storms produce large ocean waves, the polarization changes suddenly and dramatically, allowing the researchers to easily identify such events in the data.

Currently, when earthquakes occur miles offshore, it can take minutes for the seismic waves to reach land-based seismometers and even longer for any tsunami waves to be verified. Using the new technique, the entire length of a submarine cable acts as a single sensor in a hard-to-monitor location. Polarization can be measured as often as 20 times per second. That means that if an earthquake strikes close to a particular area, a warning could be delivered to the potentially affected areas within a matter of seconds.

During the nine months of testing reported in the new study (between December 2019 and September 2020), the researchers detected about 20 moderate-to-large earthquakes along the Curie Cable, including the magnitude-7.7 earthquake that took place off of Jamaica on January 28, 2020.

Although no tsunamis were detected during the study, the researchers were able to detect changes in polarization produced by ocean swells that originated in the Southern Ocean. They believe the changes in polarization observed during those events were caused by pressure changes along the seafloor as powerful waves traveled past the cable. "This means we can detect ocean waves, so it is plausible that one day we will be able to detect tsunami waves," says Zhan.

Zhan and his colleagues at Caltech are now developing a machine learning algorithm that would be able to determine whether detected changes in polarization are produced by earthquakes or ocean waves rather than some other change to the system, such as a ship or crab moving the cable. They expect that the entire detection and notification process could be automated to provide critical information in addition to the data already collected by the global network of land-based seismometers and the buoys in the Deep-ocean Assessment and Reporting of Tsunamis (DART) system, operated by the National Oceanic and Atmospheric Administration's National Data Buoy Center.