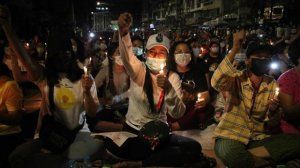 Five people were killed on Sunday and one on Saturday but documented on Sunday, the Assistance Association for Political Prisoners (AAPP) said in its latest report.

"This is the number verified by AAPP. The actual number of fatalities is likely much higher," the group said.

As many as 3,555 people are under detention and 82 of them have been convicted, while 1,396 people have been issued arrest warrants.

The crackdown in the Southeast Asian nation started just after Feb. 1, when democratically elected state counselor and de facto head of government Aung San Suu Kyi was ousted in a coup and detained by the military junta.

Suu Kyi's National League for Democracy (NLD) party won a second term in November, but the military said rigging of the polls had forced it to seize power.

Pro-democracy protests have taken place in cities and towns across the country since the military takeover.

The UN and rights groups have expressed concern over the use of disproportionate force by the military junta on unarmed protesters.