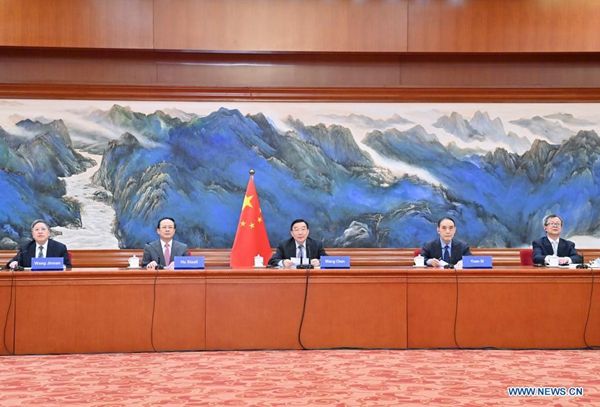 Wang Chen, a member of the Political Bureau of the Communist Party of China Central Committee and vice chairman of the National People's Congress (NPC) Standing Committee, made the remarks when co-chairing a video conference between the NPC and the China-Bridge association with Hans-Peter Friedrich. Friedrich is the vice president of the German Bundestag.

Wang highlighted climate change as the most promising cooperation area between China and Germany and China and the EU. He said China's announcement of the vision and targets of carbon dioxide emissions peaking and carbon neutrality demonstrates China's firm resolution and sense of responsibility to address climate change.

The NPC would work with the German Bundestag to make joint efforts and promote the China-Bridge association to become the bridge that connects the peoples and cooperation between the two countries, Wang said.

Friedrich said the German Bundestag and the China-Bridge association are willing to play a positive role and contribute to addressing climate change and achieving sustainable development with China.