We hope that the Trilateral Working Group on Karabakh will resume its activities in the near future - Zakharova
Read: 265

Armenia fears that the Zangazur corridor will enhance Turkey's empowerment in the region - Elkhan Shahinoglu
Read: 255

There are wide opportunities for increasing trade turnover between Azerbaijan and Russia - Russian Deputy Minister
Read: 238 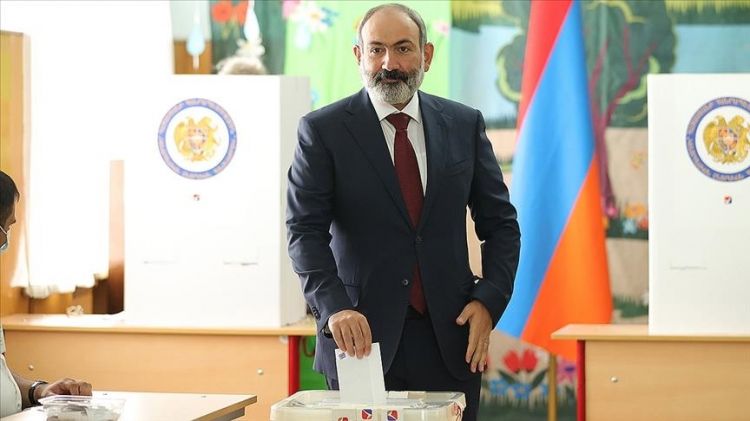 The party of Armenia’s acting Prime Minister Nikol Pashinyan won the early parliamentary polls with 53.92% of the votes, according to preliminary results on Monday, Eurasia Diary reports citing Anadolu Agency.

According to the results, Pashinyan’s party lacks 0.08% to reach 54% threshold to form the government by itself.

The I Have Honor Alliance, supported by the former President and Prime Minister Serzh Sargsyan, gained 5.23% of the votes and entered the parliament.

The voter turnout in the election was 49.4%, according to the commission.

In a written statement, the Armenian Alliance said that they would not recognize the election results for now, citing “hundreds of signals from polling stations testifying to organized and planned falsifications.”

While vote counting was underway, Pashinyan announced on Facebook that he would start negotiations with all “healthy” political powers.

Twenty-six political movements competed in the election for the office vacated after Pashinyan resigned from premiership on April 25.

A total of 22 political parties, along with four alliances, participated in the election to receive votes from over 2.58 million people.

Pashinyan’s resignation came after last year's defeat in the Karabakh region, where a six-week-long war between Armenia and Azerbaijan ended with a Russian-brokered truce on Nov. 10.

Relations between the two former Soviet republics of Armenia and Azerbaijan have been tense since 1991 when the Armenian military occupied Nagorno-Karabakh, also known as Upper Karabakh, a territory internationally recognized as part of Azerbaijan, and seven adjacent regions.​​​​​​​