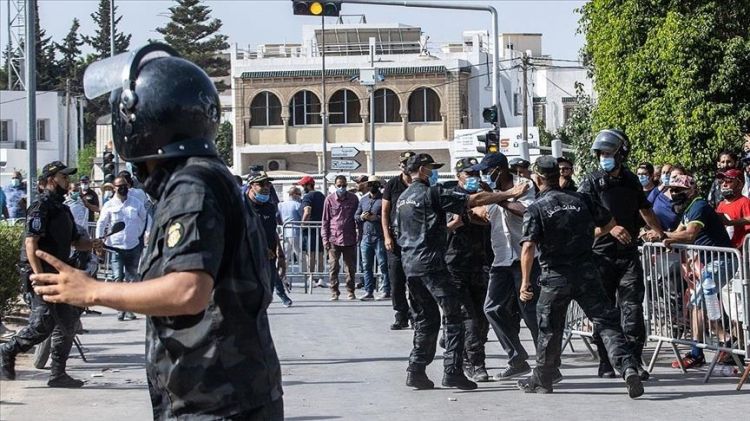 Several senior Turkish officials have condemned Tunisia’s president for seizing complete executive power after sacking the prime minister and suspending parliament.
Tunisian President Kais Saied dismissed the government of Prime Minister Hichem Mechichi late Sunday, froze parliament, and assumed the executive authority with the assistance of a new prime minister.
In his speech, Saied said he will lift the immunity of all members of parliament and assume the role of the public prosecutor. He said he has taken this decision after consulting Mechichi and Parliament Speaker Rached Ghannouchi.
"What is happening in Tunisia is worrisome. Decisions prohibiting the elected parliament and MPs from fulfilling their duties is a coup against the constitutional order," Turkey’s parliament speaker said on Twitter.
Mustafa Sentop added: "Military/bureaucratic coup is illegitimate in Tunisia like it is everywhere. People of Tunisia will hold on to constitutional order and the law."
Turkey’s presidential spokesman also rejected "the suspension of the democratic process and the ignoring of the democratic will of the people in Tunisia."
"We condemn initiatives that lack constitutional legitimacy and public support. We believe that Tunisian democracy will emerge stronger from this process," Ibrahim Kalin said on Twitter.
Omer Celik, a spokesperson for Turkey’s Justice and Development (AK) Party, described the current developments in Tunisia as a "coup" targeting political legitimacy in the country.
Celik added that “Turkey stands by the Tunisian people and respects the struggle for democracy,” underlining Turkish President Recep Tayyip Erdogan’s support for democracy in the country.
Stressing that Turkey is against all coups, Numan Kurtulmus, the party’s deputy chairman said: “We see that the coup in Tunisia will harm the Tunisian people. As Turkey, we are against this anti-democratic action all the way.”
Tunisia has seen popular protests against both the government and the opposition, with attacks reported on headquarters and buildings of Ghannouchi’s moderate Islamist Ennahda party in several Tunisian provinces.
Since January, the country has been in a political deadlock amid a dispute between Saied and Mechichi over a government reshuffle that Saied rejected.
The country is also facing an economic crisis and a surge in coronavirus infections amid warnings of a possible collapse of the health system.