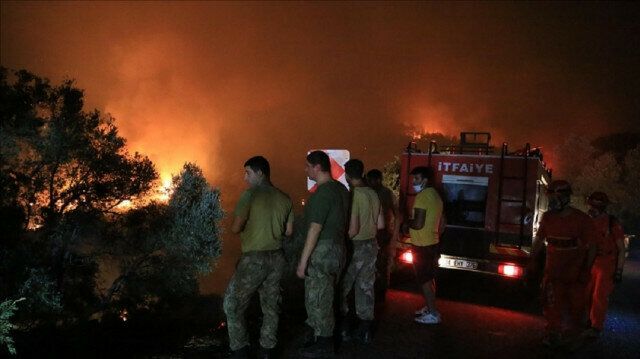 Turkish firefighters maintain their battle against wildfires in the Milas and Bodrum districts of the touristic city of Mugla in southwestern Turkey, with the assistance of aerial elements pouring tons of water.
A wildfire in Milas first erupted on July 31 and spread to many other neighborhoods, while firefighters restlessly spend efforts to contain the fast-spreading fires.
The extinguishing efforts on the ground continue day and night, and aerial elements play an important role in the operations. Once a fire is contained at a location, authorities immediately start cooling down the area to prevent the eruption of another fire.
Construction vehicles clean the way in some forest areas to help fire brigade trucks move and put out wildfires, while volunteers and locals do not hesitate to join the strife and do their best to contribute to firefighting.
In some settlements evacuated as part of measures and at locations where fires are currently under control, locals have begun to bring back their livestock.
The unmanned aerial vehicles (UAVs) have had a flight time of 462 hours amid the ongoing wildfires.
The country has been using its UAVs effectively in fighting terrorism, and they are also playing an important role now in protecting the "green homeland," a reference to the country’s forests.
The UAVs belonging to the Turkish army get visuals in the wildfire areas and simultaneously share them with a coordination center that sends them to the aerial firefighting vehicles, briefing them over the location and direction of wildfires.