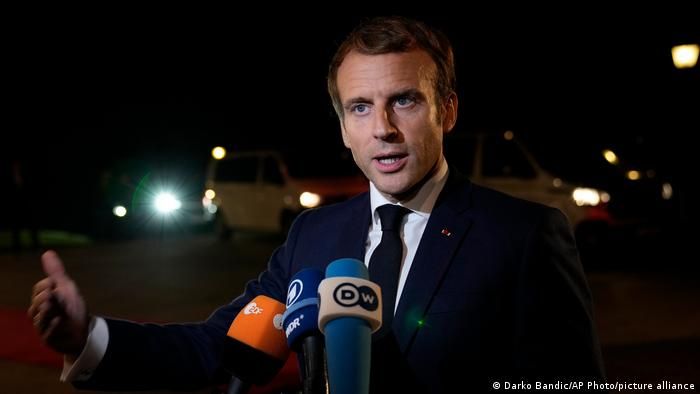 The French president said other nations were watching as the UK clashed with France following its departure from the EU. Tit-for-tat measures are now threatened in the row over post-Brexit access to fishing waters.
French President Emmanuel Macron has said his country's dispute with Britain over fishing rights is a test of the UK's credibility in a post-Brexit world.
Ahead of a meeting with UK Prime Minister Boris Johnson this weekend at the G20 summit in Rome, Macron defended France's position in a row that is deteriorating by the day.
What did Macron say?
"Make no mistake, it is not just for the Europeans but all of their partners. Because when you spend years negotiating a treaty and then a few months later you do the opposite of what was decided on the aspects that suit you the least, it is not a big sign of your credibility,'' Macron told the Financial Times (FT).
The French president said he was sure that Britain has the "goodwill" needed to solve the dispute. "We need to respect each other and respect the word that has been given," he said, according to the FT.
Seeking to calm the stormy waters, Johnson told reporters on Friday that France is "one of our best, oldest, closest allies, friends and partners," which he would restate during talks with Macron.
He added that he was puzzled by the fishing dispute and feared Paris — not Britain — may have breached terms of the Brexit trade deal.
"Obviously we're going to take the appropriate action," Johnson warned.
What is the UK-French fishing row?
French fishing fleets have accused officials in Britain of using Brexit as an excuse to stop them from securing licences for waters they say they have plied for years.
France has said new restrictions imposed by London run counter to the agreement Britain signed when it left the European Union.
Paris said French fishers have not been granted the full number of fishing permits, while London said it is issuing licences to vessels that can prove they have previously fished in UK waters.
Tensions already spiraled into a brief naval standoff last May, when dozens of French trawlers massed in front of the Saint Helier harbor in the Channel Island of Jersey.
Fears of a blockade prompted Johnson to send two Royal Navy gunboats to the area, with France then sending two of its own coastal patrol vessels before the French trawlers retreated.
The acrimony worsened this week when a British scallop dredger, the Cornelis Gert Jan, was escorted to the northern French port of Le Havre on Thursday after French officials said its crew failed to prove it was allowed to fish in French waters.
British officials said the boat had the correct documentation.