"Both Lukashenko and Putin's threats are no more than desperate attempts of bluffing" - Ukrainian expert
Read: 270 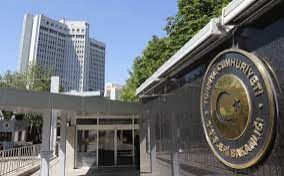 Greece's often untrue accusations cast a shadow over the atmosphere of sincere and honest dialogue between the two countries, the Turkish Foreign Ministry said in a statement, Report informs.

"The unfounded statements made about our recent history at the opening ceremony of the construction plan of the Pontus Hellenism Palace in Surmene are causing disappointment in Turkey. These allegations do not change the fact that the occupier in Anatolia was Greece, and that the Greek army was savage, especially against innocent people in Western Anatolia," the ministry.

According to the Turkish ministry, Greece is obliged to pay for the damages, which are also reflected in the report of the Inter-Allied Commission, under Article 59 of the Lausanne Peace Treaty. The ministry stressed that such attitudes and behaviors are incompatible with the responsibilities of public officials.

In this context, the Turkish Foreign Ministry once again called on neighboring Greece to resort to common sense and constructive understanding.

Greek President Katerina Sakellaropoulou made ambiguous statements about Turkey's history at the presentation of the construction plan for the Surmene Pontus Hellenistic Palace to be built in Athens.