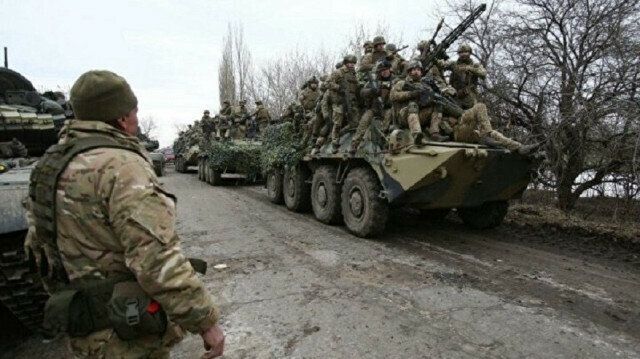 Over 42 Ukrainian troops have laid down their arms and surrendered in the city of Mariupol, the Russian Defense Ministry announced on Tuesday, Yeni Safak reports.

They were among 100 Ukrainian soldiers who engaged in a night battle with Russian forces in a failed attempt to escape the siege-battered city, ministry spokesman Igor Konashenkov said at a morning press briefing in Moscow.

As a result, three Ukrainian tanks, five armored vehicles, and seven cars were destroyed in the fighting that killed about 50 people, said Konashenkov.

"A group of Ukrainian servicemen numbering up to 100 people in armored vehicles tried to fight their way out of the plant (Illich Steel and Iron Works) and leave the city in a northerly direction. This breakthrough attempt was thwarted by airstrikes and artillery," he added.

"In total, since the beginning of the special military operation, 130 aircraft, 99 helicopters, 244 air defense systems, 443 unmanned aerial vehicles, 2,139 tanks and other armored combat vehicles, 241 multiple rocket launchers, 917 field artillery and mortars, as well as 2,046 units of special military vehicles have been destroyed," he said.

In a separate statement, Ukraine's President Volodymyr Zelenskyy said "thousands of people" had been killed in Mariupol.

Addressing the South Korean parliament, Zelenskyy asked for weapons and military equipment, warning that Russia may launch a large-scale military offensive this week, though its soldiers are "demoralized."

Russia, for its part, has said Kyiv is preparing for a counteroffensive between April 18 and 22.

At least 1,842 civilians have been killed and 2,493 injured in Ukraine since Russia launched a war on Feb. 24, according to UN estimates, with the true figure feared to be much higher.

Around 4.6 million Ukrainians have fled to other countries, with millions more internally displaced, according to the UN refugee agency.