Sri Lanka has granted permission for the Chinese space-tracking vessel Yuan Wang 5 to dock at a port that China runs. The Hambantota port is the southernmost in Sri Lanka and has raised the concern of India. 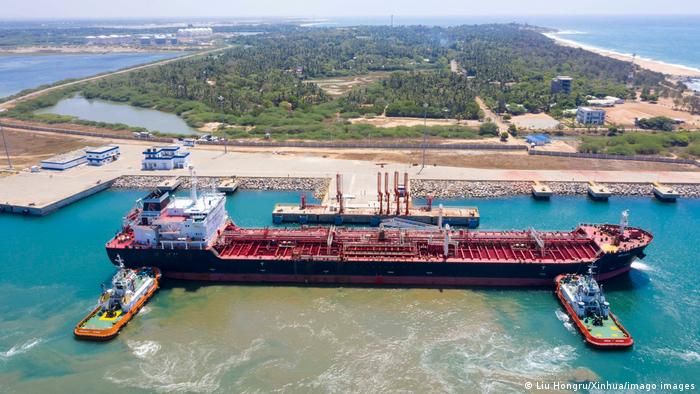 The Chinese space-tracking vessel Yuan Wang 5 was given permission to dock early next week at Sri Lanka's southernmost port, Hambantota, Sri Lanka said recently.
Hambantota has been a Chinese-run port since 2017 when Sri Lanka and China signed a 99-year lease after Colombo struggled to pay back debt.
The Yuan Wang 5 survey vessel is described by security analysts as the latest generation of China's space-tracking ships capable of monitoring satellites, rockets and intercontinental ballistic missiles.
Washington has said Yuan Wang class ships are operated by the Strategic Support Force of the People's Liberation Army.
What does China want?
China and India have been in competition to expand influence in Sri Lanka as Colombo faces the most severe economic crisis since independence.
China agreed to restructure infrastructure loans to Sri Lanka, a critical step for the country to reach a bailout deal with the International Monetary Fund.
The Yuan Wang 5 had been scheduled to arrive at Hambantota on Thursday, August 11, but its revised schedule currently has it docking Tuesday, August 16.
Colombo said the Yuan Wang 5 is only scheduled to resupply and has no specific scientific research mission to carry out in Sri Lankan waters.
What does India fear?
India has delivered the largest amount of aid of any country in the form of food, fuel, medicine and cooking gas to Sri Lanka, but is wary of Beijing's expanding influence in the Indian Ocean.
Delhi fears Beijing wants to use Hambantota as a military base and may be docking to enable surveillance of Indian military installations. At the same time, India disavowed assertions that it had attempted to pressure Sri Lanka to turn the Yuan Wang 5 away.
A spokesperson for India's Ministry of Foreign Affairs, Arindam Bagchi, said, "We reject categorically the 'insinuation' and such statement about India. Sri Lanka is a sovereign country and makes its own independent decisions."
Bagchi added that India was aware of a planned visit by the Yuan Wang 5 and intends to safeguard Delhi's security and economic interests.