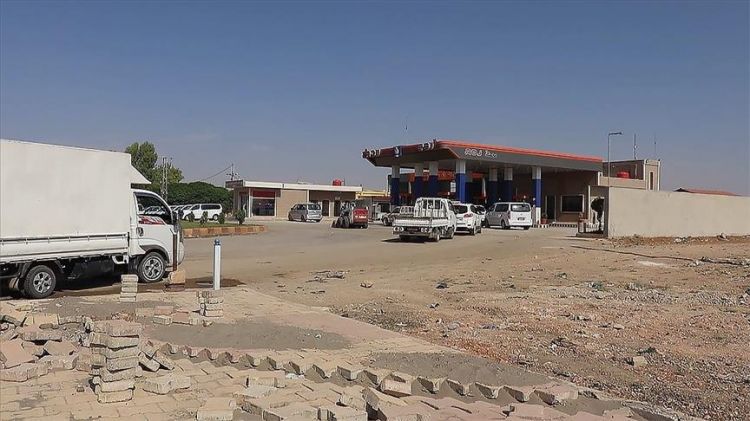 The PKK/YPG terrorist organization has deprived Syrian people of fuel in oil-rich Hasakah province in eastern Syria.
After controlling 90% of all oil resources in the region, the terror group is not letting common people access fuel.
Hasakah is among the provinces that are facing an oil crisis.
Even though the province has many oil stations, the terrorist organization allows people to buy oil from only three stations.
Civilians wait in long lines to be able buy oil.
Many people have to buy fuel for their vehicles from the black market at three times the cost.
Deepening black market, oil smuggling
Locals told Anadolu Agency that the PKK/YPG, which makes a sizeable profit from oil revenues, is diverting the fuel to the black market through merchants with close ties to the organization.
The group's smuggling of fuel to regime-controlled areas is also one of the main causes of the crisis in the region.
It conducts oil exchanges with the Assad regime through Husam Katirci, a militia leader and deputy known for his closeness to the regime.
The PKK/YPG, the "partner" of the US in the region, violates American laws both by selling oil to the regime and by trading with Katirci, who is on the sanctions list of the US Treasury Department.
There are sanctions for helping out the regime develop domestic oil production and for having trade relations with the regime according to the “Caesar Syrian Civil Protection Law,” which was signed by the former US President Donald Trump on Dec. 21, 2019 and which entered into force on June 17, 2020.
‘Oil like sea’
Serif Naser, a local, told Anadolu Agency that only three oil stations are selling fuel in the province where hundreds of thousands of people live.
Saying that he comes to the station at 5 a.m. and leaves at 3 p.m. every day, Naser added: "Citizens are unable fill fuel in their cars. If they removed quota on fuel, this crisis would be averted."
The terror group has put a limit on how much fuel a person can fill in their vehicle.
“There is a big crisis right now. We have oil like the sea, but it is being smuggled,” he added.
Another resident, Yaser Ali said: "Half of the day is spent waiting in the fuel queue. Why is this crisis happening when there should be plenty of fuel in the summer season?
“There is inequality in distribution and I don't know if the fuel is being smuggled to other places."
Saleh Abu Isa, another Syrian, said that he has been waiting in line for hours every day, stating: "There is fuel at the main source, but there is a problem with distribution. Sometimes we go to other cities to find fuel."
Syria has 14 provinces some of which are controlled by armed opposition groups.
Parts of Idlib, Raqqa, Hasakah and the countryside of Aleppo are controlled by anti-regime groups, while the YPG/PKK terrorist group controls Deir ez-Zor and most parts of Raqqa and Hasakah provinces along with parts of Aleppo.
Ongoing war
In its more than 35-year terror campaign against Türkiye, the PKK -- listed as a terrorist organization by Türkiye, the US, UK, and EU -- has been responsible for the deaths of more than 40,000 people, including women, children and infants.
The YPG is the PKK terror group's Syrian offshoot.
Syria has been mired in a vicious civil war since early 2011 when the Assad regime cracked down on pro-democracy protests with unexpected ferocity.
UN estimates show that more than eight million Syrians have either been internally displaced or become refugees in other countries since 2011.
The Syrian regime held presidential elections in May in which authorities say Assad won 95.1% of votes.