Joint message of Iran, Russia and China to the world | Eurasia Diary - ednews.net

Joint message of Iran, Russia and China to the world 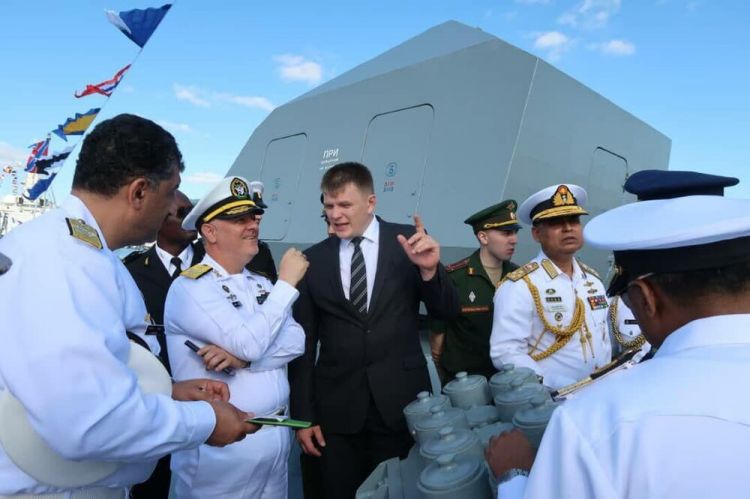 Many media outlets interpreted the maneuver as a "clear warning to America". Some main political and geopolitical aspects of the wargame are given here:

Iran's dominant position in the region cannot be overlooked

The most significant aspect of the maneuver is Tehran's clear message to those countries that seek to isolate Iran through economic and political pressure. Through holding this joint maneuver, Tehran sent this warning to the foes that Islamic Republic is a power that world powers such as Russia and China cannot close their eyes to.
The Turkish Anatolia news agency, quoting experts, said, "The maneuver is a clear message from Tehran to Washington." The state-run news agency also said the maneuver was conducted at a time that Iran is decreasing its commitments to the 2015 nuclear deal, officially called the Joint Comprehensive Plan of Action (JCPOA).

In its editorial, the Al-Rai Elium newspaper also said "An Iran which is facing the harsh U.S. blockade will profit furthermost from this maneuver since it will shatter the U.S. blockade, at least psychologically, and shows that Iran is not an isolated country and has strategic friends at the international level."
The widespread coverage of the joint exercise by regional and overseas media indicated that Tehran has selected a suitable time and good thing to indirectly show its power to the United States.

From Iran's success to Washington's failure to establish international coalition

The joint marine maneuver took place at a time that the United States has launched an intensive effort in the recent months to form a global naval alliance to allegedly secure the Persian Gulf. In its preliminary calculations, after the Fujairah events, the Pentagon expected to form the coalition with participation of great powers; in line with that policy Washington asked more than 60 countries to join the coalition. Reportedly, Abu Dhabi even entered talks with Moscow to convince Russia to join the coalition. But except Washington’s traditional allies such as England and Australia, no country accepted to join the coalition.
Enormous efforts by the Pentagon to form the alliance failed. Only seven countries that three of which host the alliance joined the coalition. In other words, if we disregard Bahrain, the United Arab Emirates and Saudi Arabia - which are the host to the coalition - only England, Australia and Albania admitted to be in the coalition. A contrast between this coalition and the number of countries that participated in the operations inside Afghanistan after the September 11 attacks demonstrates how the situation has changed for Washington.

In the face of the U.S. failure to form a big global coalition to supposedly protect the Persian Gulf, by holding this joint maneuver – which is unprecedented in the history of the region – Tehran sent a warning to the Pentagon. Today, the Islamic Republic of Iran has reached a level of power that not only it can never be taken for granted in calculations but it has succeeded to bring together emerging powers and form a strong bloc against enmity.

One of the issues that should be noted in scrutinizing this maneuver is the situation of Chabahar Port as the host of the maneuver. From a geopolitical point of view, Chabahar port is very important and India has invested heavily in it. For Central Asian countries the port is going to serve as a gateway to high seas. If this is accomplished, Iran's geopolitical weight will rise meaningfully.

The sensitivity toward Chabahar port and its cold rivalry with Pakistan's Gwadar Port are so great that in the former six-month sanctions exemptions by Donald Trump the port was given waivers! Now, Tehran, with its joint maneuver with China and Russia, has revealed that the geopolitical importance of the port is highly noticed by great powers, and that China spreads red carpet for the development and security of Chabahar.

Promising prospects for geostrategic collaboration between Tehran, Beijing and Moscow

One of the greatest accomplishments of this maneuver was to show the level collaboration between Iran, China and Russia. For the first time in history, China and Russia participated in a naval maneuver in the Persian Gulf and the Sea of Oman region. The wargame at a time that the harshest sanctions in history are being introduced against Iran shows that Beijing and Moscow have a great potential to establish “strategic partnership” with Iran.
Probably this issue, more than any other thing, has caused concern among the White House officials and anti-Iran lobbyists in Washington.

India is seeking to form an influential global alliance with China and Russia to compete the West. India has also invested billions of dollars in Chabahar port and is working hard to make it a rival to Gwadar port and to turn it into Central Asia’s gateway to the Sea of Oman and the Persian Gulf. Nevertheless, under pressure by Washington, New Delhi has lowered its level of cooperation with Tehran since past year, and even some sources have claimed that India no longer purchases oil from Iran. Similarly, India has the least collaboration with Tehran in other economic and political areas.
In such a situation, China and Russia as two superior powers participated in the joint drill which started from Chabahar port. In view of this fact, New Delhi should reassess its prior calculation and reconsider submissiveness in the face of pressure by Washington.