US blocked major arms deals with Turkey, including the F-16 modernization
Read: 815

- The Jordanian historian Al-Armouti, author of the book “The Kashmir Crisis” / Why has not the Organization of Islamic Cooperation exerted any effort for Palestine and Kashmir? - PHOTOS
Read: 594

Turkey may be indirect target of Azeri-Armenian clashes 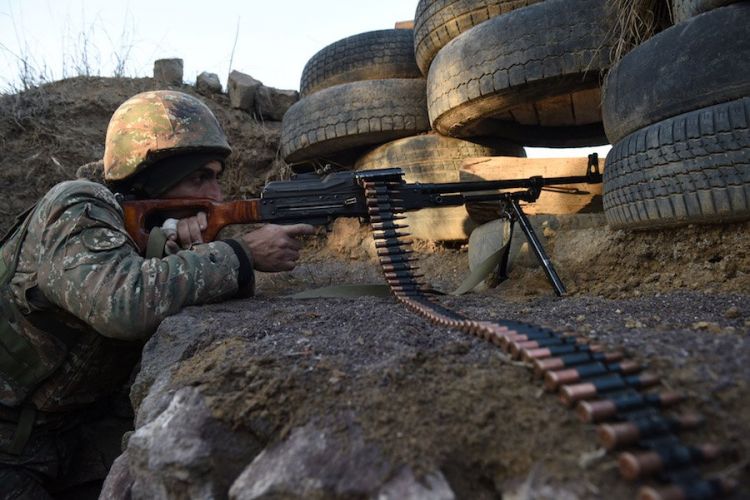 Clashes on the Azerbaijan-Armenia border on July 12 resulted in the deaths of an Azeri lieutenant and four soldiers. Two days later, renewed skirmishes killed a major-general and seven soldiers, well as an unspecified number of Armenian military personnel.

Military relations have always been tense between these two Caucasus countries following the dismemberment of the Soviet Union. The bone of contention is the Nagorno-Karabakh province, which is an Azeri enclave. It was made an autonomous oblast (administrative region) of Azerbaijan by Joseph Stalin in 1923. In the run-up to the fall of the Soviet Union in 1989, the Armenians living in Karabakh started to ask for the transfer of the province from Azerbaijan to Armenia. Full-fledged military confrontations took place between the late 1980s and May 1994.

At the end of these clashes, Armenia occupied not only Nagorno-Karabakh, but also other Azerbaijan provinces corresponding to a fifth of the country’s entire territory. A cease-fire was brokered by a group of countries called the Minsk Group — Russia, the US and France — but it has been frequently broken.

On previous occasions, the cease-fire violations largely took place along the Nagorno-Karabakh line of contact. But the most recent clashes took place in the province of Tovuz — an area far from the contentious border, at the intersection of several strategically important routes. It is on the path of the Baku-Tbilisi-Ceyhan oil pipeline, Baku-Tbilisi-Kars railway, Turkey-Georgia-Azerbaijan highway, and the Trans-Anatolian gas pipeline (TANAP). Such a strategically important intersection is naturally an important military target.

When Turkey and Azerbaijan decided to build a railroad to link the easternmost Turkish province of Kars to the Azeri capital Baku, there was already an existing and functioning railroad that went through Armenia. However, for political reasons, these two countries decided to lay a new railroad that would circumvent Armenia and go through Georgia to the north.

Another major infrastructure project that circumvents Armenia is the Baku-Tbilisi-Ceyhan oil pipeline. It involves a partnership of oil companies from nine countries: Turkey, Azerbaijan, the US, UK, Norway, France, Japan, Italy, and India. It has a projected lifespan of 40 years and carries 1 million barrels of Azeri oil per day to Turkey’s Mediterranean port of Ceyhan. A shorter and more economic route would have been to go through Armenia, but neither Turkey nor Azerbaijan wanted to involve Yerevan in the project, so they decided to lay a longer pipeline that goes through Georgia. Azeri President Ilham Aliyev said during the negotiations for setting up the pipeline company: “If we succeed with this project, the Armenians will end in complete isolation, which would create an additional problem for their future, their already bleak future.”

The third important infrastructure project that excludes Armenia is the TANAP, but here the country whose economic interests are jeopardized is Russia, rather than Armenia. This pipeline carries gas from the abundant Azeri reserves of Shah Deniz to Europe by linking it to Greece and the Trans-Adriatic pipeline that crosses Albania and the Adriatic Sea to reach Italy. The TANAP meets an important part of Turkey’s demand and exports the surplus to European countries. This pipeline competes with two others that supply Russian gas to Turkey and from there to Europe.

In light of this background, could Russia be behind the Armenian attack? No eventuality can be discarded outright because the TANAP constitutes an alternative to the Russian gas pipelines to Turkey and Europe. However, this seems less likely in the present circumstances because — despite their conflicting interests on a number of issues — Turkey and Russia are genuinely cooperating in Syria and in many economic areas. In addition, when Nikol Pashinyan became Armenia’s prime minister in 2018, he opted for a pro-American foreign policy and created unnecessary problems for Russian businessmen operating in the country. Russia retaliated by using anti-Pashinyan circles in the country and cooperating more closely with President Armen Sarkissian.

The recent skirmishes have caused instability for the civilian inhabitants of Tovuz and could force them to evacuate, allowing Armenia to gain control, thus threatening Turkish and Azeri economic interests in this strategic corridor.

Based on the foregoing background, one may speculate that the Armenians might have thought Turkey would not be able to spare the military resources to open a new front in this region. Therefore, they may have been tempted to force Azerbaijan into a solution to the Nagorno-Karabakh issue while the Turkish army is knee-deep in the crises in Syria, Libya and Iraq.

This article is written by Yasar Yakis. former foreign affairs minister of Turkey.