Sevres at 100: The treaty that partitioned the Ottoman Empire | Eurasia Diary - ednews.net

Sevres at 100: The treaty that partitioned the Ottoman Empire 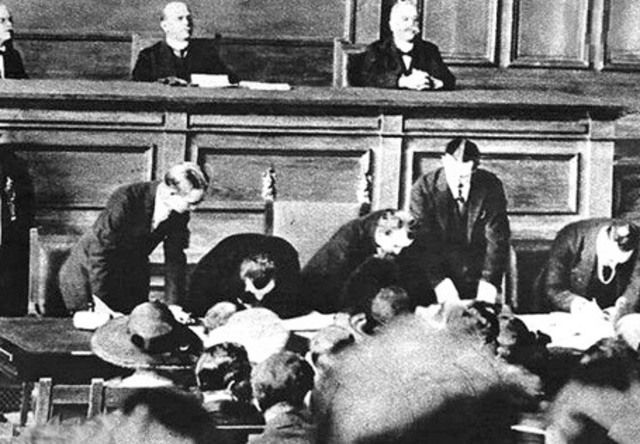 Monday, August 10 marks the centenary of the Treaty of Sevres. This is the story of why the infamous treaty still resonates a hundred years later.

On August 10, 1920, a peace treaty signed between the Allied Powers and an Ottoman delegation was set to mark the formal end of First World War with the empire.

Signed in a porcelain factory outside Paris, the treaty was quickly proclaimed as brittle as the porcelain produced there. The ‘sick man on the Bosphorus’,  as the Ottoman Empire had come to be known among the allied powers, was to be dismantled and partitioned.

With the Ottoman Empire exhausted from wars by 1918, the stage was set to deal a final and fatal blow that was Sevres. Though never implemented, the Treaty of Sevres continues to resonate a hundred years later. In fact, Sevres has become a byword for external interference in and double standards employed by European countries towards Turkey.

The Treaty of Sevres can be described as the lesser known equivalent of the Treaty of Versailles for the Ottoman Empire. The defining characteristic of these treaties were their exceptionally punitive measures.

Though Versailles also came to signify harsh treatment of a vanquished rival, the Treaty of Sevres was far more punitive. As Justin McCarthy notes, the Allies dictated peace terms as if the Turks were completely defeated.

The Sevres treaty prioritised Allied interests followed by Greek and Armenian interests. In fact, the Sevres treaty was on the verge of achieving the Greek nationalist project known as the Megali Idea, which would have deprived Turkey of its European territory, as well as most of  its Aegean and Black Sea coast.

The Treaty of Sevres is a long and detailed document comprising 433 articles. Its purpose was partition, subjugation, and dispossession of what remained of the Ottoman lands at the close of the Great War. The treaty dealt with a number of issues ranging from establishment of new states on Turkish territory to petty details on railway wagons.

The most ominous was Part III, Section I, Article 36 which provided for Constantinople (Istanbul) to remain under Turkish control but subject to change if Turkey failed to “observe faithfully the provisions of the present Treaty.“ This was the leverage that the Allies would use to ensure compliance of the already subservient Istanbul government. Next, Article 37, stipulated the formation of a “Commission of the Straits“ comprising representatives of Allied Powers, including Greece, which would in effect control the Turkish Straits. With the Megali Idea's proponents' sights set on Constantinople, Articles 36 and 37 were ominous.

While Istanbul was all but officially subjugated, the treaty's articles 63-122 can be termed “articles of partition of Turkish territory.“ For clauses that provided for partition of territory and establishment of new states at the expense of Turkey were in many ways the essence of Allies' interests. Turkish territory was to be carved up for a Kurdish state (Articles 63-64), Greece would incorporate Izmir and its surrounding areas (Articles 65-83), and Armenia would be expanded at the expense of Turkey's eastern territories (Articles 88-90).

The treaty clipped the wings of the already weakened position of the Sultan as Caliph of all Muslims. Article 139 was meant to ensure that the Sultan's and Caliph's reach would not extend beyond the increasingly shrinking territory of the Istanbul government.

The subjugation would further extend to the financial realm. A new and powerful Financial Commission was to be established which would have in essence taken over control of Turkey's finances and the management of its resources. (Article 236).

The Treaty of Sevres gained infamy not only for dividing up territory but also for seeking to dispossess Turkey of its historical legacy and documents. The objectives of Articles 423-425 were precisely this.

Article 423 provided that Turkey would hand over to the Allies “books, documents and manuscripts from the Library of the Russian Archaeological Institute at Constantinople.“

Turkey was also to hand over local land registers to Greece for the territories taken over by Greece after 1912 (Article 424).

Newly emerging states from the ruins of the Ottoman Empire were to be given documents and archives related to endowments (Waqf) of the respective former Ottoman territories (Article 425).

Resistance to the treaty

The Treaty of Sevres was rejected by the Turkish resistance movement. The Turkish Parliament, established in April 1920, had already taken shape and was leading the national struggle.

On August 19, 1920, the Parliament rejected this humiliating treaty and declared the signatories and those officials who supported it guilty of treason.

The terms imposed by the Sevres treaty confirmed that Mustafa Kemal Pasha and the resistance movement he led had read the situation well early on. In fact, the success of the national resistance movement ensured that the treaty was not implemented by European powers or their allies.

The scale and scope of the partition and subjugation envisioned by European powers became ingrained in Turkish consciousness ever since. In fact, the Sevres analogy and the Sevres syndrome come up frequently when European countries re-engage in the practice of double standards towards Turkey.

This crucial period in Turkish history reaffirms a basic tenet in international politics – namely that facts on the ground shape peace agreements. The Turkish War of Independence changed these facts on the ground, abrogated the Sevres treaty and led to the peace concluded at Lausanne.

This article is written by Hamza Karcic.