HDP row may break away Turkey from EU - The final decision depends on the US and UK relations | Eurasia Diary - ednews.net 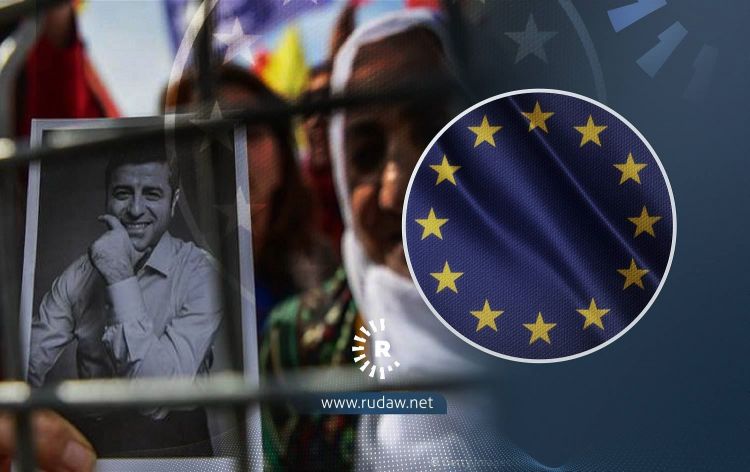 The HDP (People's Democratic Party) and the Kurdish issue, which are always on the agenda of Turkey, are heating up again. The harsh demand and allegation of the European Convention on Human Rights on the HDP leader Selahattin Demirtash, who was sentenced to 4 years and 8 months in prison by the Turkish Supreme Court on charges of supporting terrorism, and Osman Kavala, a Turkish businessman arrested on suspicion of collaborating with FETO, has attracted the attention of a wide audience. Interestingly, in addition to interfering in the internal affairs of the Turkish government, the ECHR has even issued a stern ultimatum demanding the immediate release of Selahattin Demirtash, who was once suspected of fueling the Kurdish problem in Turkey and supporting many terrorist acts.
But who are the characters of Selahattin Demirtash and Osman Kavala that the ECHR backs them against the Supreme Court's decision in Turkey? Before looking at the reasons and opinions, let's look at the brief history of the detainees.

Selahattin Demirtash, a young Kurdish political leader, has been a member of the Turkish parliament since 2007 and led the People's Democratic Party from 2014 to 2018 with his counterpart Figen Yukseldag. In November 2016, the Turkish Parliament revoked the immunity of several HDP members, including Selahattin Demirtash and his colleague Figen Yuksekdag. Both political figures were arrested and sent to a prison in Edirne near the border with Greece and Bulgaria. The reason for the arrest of Selahattin Demirtash was his incitement to Kurdish problems and civil war in Turkey, as well as support for terrorism during his political career. During the interrogation, the HDP leader was confirmed on the basis of his cooperation with the PKK and his support for the Kobani protest (name refers to the Kurdish region of Ayn Al Arab in Syria), which killed 53 civilians on October 6-8.
Selahattin Demirtash, who was found guilty of terrorism and completely deprived of his election mandate and political powers, was arrested in 2018 for 4 years and 8 months.
Osman Kavala, who is known in Turkey as a businessman and is often mentioned in political games, is another person who is being backed and urged by the ECHR for his immediate release from the prison.

Born in Paris, France in 1957, Osman Kavala, a Turkish businessman or philanthropist, has been helping Turkish civil society organizations since the 1990s. In fact, if we look at Osman Kavala's family story, we can see that his family moved from Greece to Turkey in the 1920s. However, Kavala, who was born in Paris and not in Turkey for some reason, came to Turkey during the coups in the 1980s and began to help several publishing houses and media outlets there. Kavala's political activities, which run parallel to Turkey's turbulent history, also played an important role in the 2016 coup attempt. He was detained on October 18, 2017 at Ataturk Airport in Turkey while trying to leave the country.
Turkish political commentator Engin Ozer told EdNews about such threatening demands of the European Convention on Human Rights, including how Turkey will react to the oppsite side.
Engin Ozer first commented on the interference of the European Convention on Human Rights in Turkey's internal affairs.
"Turkey has been a candidate for EU membership since 1963 and has signed some important agreements. Although Turkey's integration into the EU is not very active today, there are provisions for Turkey to recognize the decisions of the European Court of Human Rights, and Turkey has agreed to implement it. For this reason, Turkey has two choices to implement the ECHR decisions: either to renounce membership or to abide by the decision. For this, Turkey must officially announce its decision to withdraw from membership.
Ozer also shared his views on what Turkey will do next and how its reaction will be towards ECHR's demand.
"Turkey's reaction to the ECHR or the counter step it will take to implement its decision depends on how successful Turkish-US relations will be," he said. "If President Erdogan strengthens political relations with the United Kingdom on this issue, Turkey can officially withdraw its candidacy for EU membership."
He added that Turkey will not make a decision against the EU unless any positive results are achieved in relations with the United States and Britain.
Elnur Enveroglu