The BBC journalist baffled the Armenian FM with questions pointing the crimes of Armenian army in Garabagh. 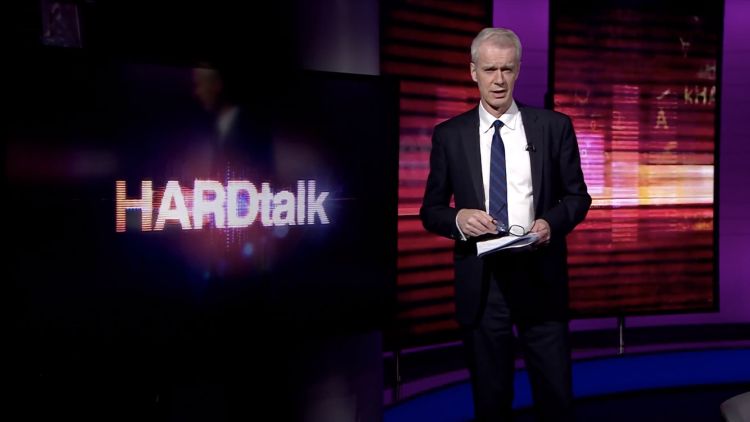 Eurasia Diary reports that the BBC TV journalist Stephen John Sackur has accused the Armenian Foreign Minister Zohrab Mnatsakanyan in his Hard Talk programme on misinformation and lies about Armenians’ approach to the Upper-Garabagh conflict.
Mnatsakanyan in particular tried to convince the BBC listeners that Yerevan was trying to make peace in the region. After listening to his arguments, Stephen Sakur asked: "You told me you want reconciliation - just a few months ago, in a statement that Prime Minister Nikol Pashinyan clearly stated:" Garabagh is Armenia. At the point, "he made a very vehement statement." How does he want peace? Armenian Foreign Minister Nikol Pashinyan said that the feasible solution for Armenia was a solution that would be acceptable to both Azerbaijan and the occupied territories. "We are waiting for a message from Azerbaijan that will meet our interests and provide security for the people living in Upper -Garabagh," he said.
Sakur returned to his previous conversation, stating that the expression "Garabagh is Armenia. Taht’s it!" contradicts international law, no matter what Pashinian means. Following "Prime Minister" saying “Garabagh is Armenia”,  at the point he knows that this is totally against the international law, the position of the UN and all independent international organizations. It is difficult for me to imagine that this could be a step towards peace," he said.
"Given Nikol Pashinyan's speech to the people with the slogans of nationalist unification in the 1980s and '90s during the war with Azerbaijan, how do you continue to let me know that the Prime Minister wants peace?" Sakur asked.
Mnatsakanyan then put the expansive position of Yerevan in an attempt to explain Pashinian's words from an Armenian point of view. "All-Armenian agenda includes Upper-Garabagh. Armenia focused on developing a unification plan and does not exclude Upper-Garabagh  residents - it is an all-Armenian issue today. Armenians are not only the Republic of Armenia, but also the people living in the whole world." Having said the Upper Garabagh is the area where our people live," he forgot that the so-called regime in the occupied territories of Azerbaijan is separate from the Armenian people.
Stephen then drew the attention of his guest to Russia, which is the main ally of Armenians, but also condemned Pashinyan for these words. "Following this unprecedented statement by Armenian Prime Minister, Russian Foreign Minister Sergei Lavrov also said "Garabagh is Armenia," which sounded the same as the Prime Minister of Albania saying “Kosovo is Albania”. Even your long-standing allies such as Russia in the military and other areas admit that this notion is unacceptable," he said.
Mnatsakanyan did not respond to his notes, reiterating that he was expecting a signal from Azerbaijan. In response, the BBC journalist emphasized that Armenia should give a signal that it is ready for a compromise, the Armenian minister deliberately refused to provide a direct answer to the question saying that the settlement of the Upper-Garabagh conflict can go through the compromise following what Armenian PM had said  - "we insist that the solution is just a compromise”. However the Armenian side did not say anything about the compromise.
Stephen Sakur then mentioned the crimes committed by Armenian army.
“It seems to me that in order to get out of this impossible situation, I need to put my imagination to work. Are you ready to admit the horrific crimes committed by the Armenian army over the past 20 years and look at this from a different perspective? The UN has accepted it. The European Court of Human Rights also accepted this. Amnesty International also spoke about the crimes of the Armenian armed forces. If you want to change that dynamic, is the new government ready to admit that they are responsible for the crimes committed in the past? ” the BBC presenter said in his question.
Mnatsakanyan did not answer this question, and irrelevantly said, "Armenia is the only guarantor of security". When the journalist asked to answer the question again, the minister again said "we are the only guarantor of security, we are responsible for the security of the population of Upper-Garabagh."