Why are Arabs fleeing Idlib taking shelter in Turkey, not Saudi Arabia? 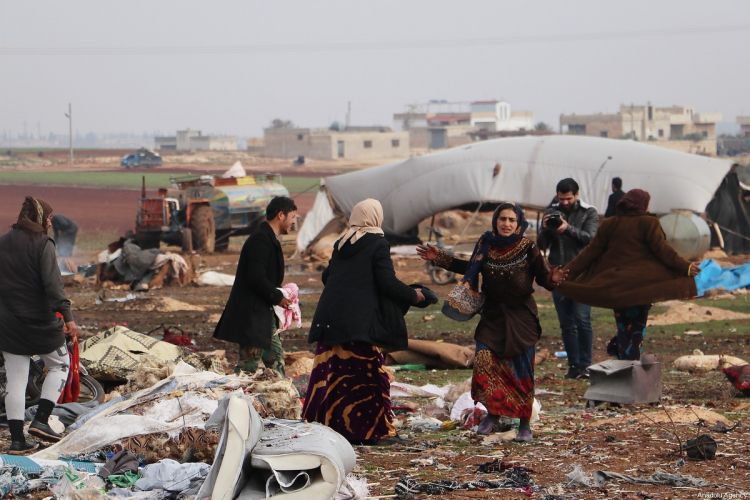 Turkey’s presence in Libya is in no way intended as a war against the nation. On the contrary, it is going to Libya upon the request of the legitimate government in efforts to stop the systematic attacks and invasion attempt launched against the people.
There are currently foreign forces in Libya, all working to collapse Libya’s legitimate government. They are all hovering like vultures over the Libyan government, which has been deprived of the power to defend itself. Khalifa Haftar has no social support or legitimacy in the eyes of Libya. On the contrary, as a result of his war crimes and crimes against humanity, he is considered guilty in the eyes of the international community, and will eventually go to trial.
The foreign powers supporting his crimes to take their share from the resources he will seize are obvious. The United Arab Emirates (UAE) is one of the main powers. This country popping up wherever there is a disorder in the Islamic world is now information that is engraved in everybody’s minds. Though we mention this state, of course its people and, as a matter of fact, many of its administrators are excluded.
Crown Prince Mohammed bin Zayed’s fear and hatred of democracy is largely the product of a personal fixation. Though there are no natural resources in Libya, the presence of the Tripoli government – as an administration that represents the people – is enough of a reason for Zayed to light the fire of disorder. He hates democracy, yet he is trying to promote his fight against democracy under the veil of anti-terrorism.
There is no plausibility for someone who is the source of and chiefly responsible for terrorism in the Muslim world to present themselves as an anti-terrorism hero. The biggest terrorist in Libya is Haftar, whom he supports and provided weapons to so he could invade all of Libya. Haftar’s biggest supporters in Libya are UAE-backed elements that act upon the most twisted Wahhabi understanding. They are bigots, fanatics, intolerant of others and are bred on Libyan soil directly by Saudi Arabia and the UAE. A few days ago, they surrendered Sitre to the pro-coup, invading Haftar forces without any resistance, and betrayed their own people.
The numerous mercenaries imported from Sudan and many African countries are also fighting on Haftar’s lines, with efforts to keep the pro-coup administration alive over their shoulders.
In brief, the UAE’s coup and invasion-level intervention in Libya is very clear; yet it brings nothing but instability, death and poverty to the people of Libya. It is the Libyans who have left their homes and countries to migrate to other countries today as a result of the instability caused by Haftar.
Of course, the UAE is not the only one supporting Haftar in Libya. He is supported by many governments such as Egypt, France, Russia and, to an extent, even the U.S. This support is ongoing despite the UN recognizing the Tripoli administration as the sole representation of Libya and having declared Haftar a war criminal.
Though this is the case, the Saudi Foreign Ministry stated last week that they “condemn Turkey’s motion to send troops to Libya,” which was passed at the Grand National Assembly of Turkey last week. The most interesting and scandalous expressions in the statement were, “This move by Turkey poses a threat to Libya’s security and stability, as well as the security of Arab countries and the region. This decision, which clearly violates international deals and principles, is an intervention in an Arab country’s internal affairs.”
The Arab League, this time Saudi Arabia alone, seems to generally remember its Arabness against Turkey only.
Saudi Arabia, which did not remember its Arabness while all non-Arab countries such as Iran, Russia, the U.S., France, and Israel were wreaking havoc in Syria, killing almost 1 million Arab civilians, displacing 12 million, and destroying Arab-Islamic historical cultural assets, suddenly remembered that Syria is an Arab country when Turkey intervened to prevent more Syrians from dying, more people from being exiled, to prevent Syria from being destroyed any further.
The same applies to Libya. Despite the Arab-Libyan people, everyone is running wild in Libya. Turkey is the only country that was invited by the people of Libya. Yet, Saudi Arabia is the one objecting to this in the name of being Arab.
While we’re on the subject, let us remember the duties they could have fulfilled as Arabs but have been neglecting: We have Arab brethren who are perishing under harsh winter conditions because they have had to flee Idlib due to the Russian-Iranian and Bashar Assad’s bombings. So please, condemn both Russia and Assad, who have been bombing them, for killing them and displacing them from their homes.
The Arab civilians fleeing these bombings are running toward Turkey, not Saudi Arabia. Why is that? Is it not the same reason why the Libyans being bombed want help from Turkey and not Saudi Arabia?
If this is a sufficient lesson, what more can I say?