Gaza’s only power plant shuts down as Israeli airstrikes continue 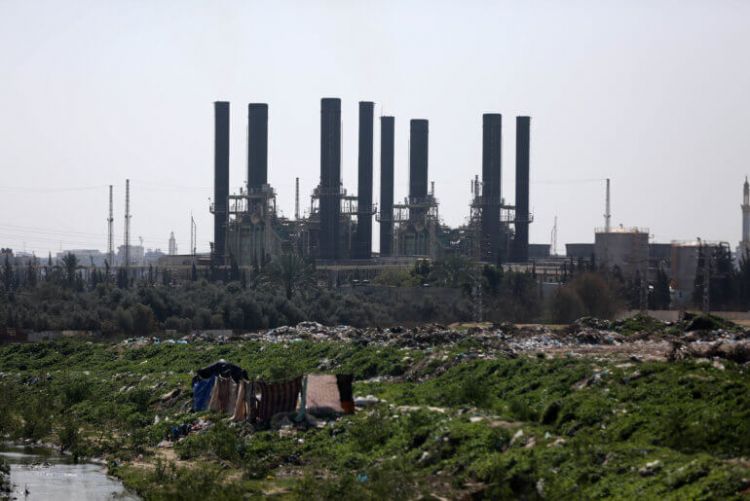 The August heat is stifling in Gaza, and the air is heavy with the smell of gunpowder. Blood dots the roads and in between buildings, and the piles of rubble from destroyed buildings continue to grow.
For the second day in a row, Israel has continued to carry out Operation Breaking Dawn, marking its latest military onslaught on the Gaza Strip. As of the time of writing, 24 people have been killed, among them 5 children, and 203 people have been injured.
Before launching the latest military operation, the Israeli government had closed off its border with Gaza on August 1, 2022, crippling major sectors in Gaza’s economy, chief among them the power sector.
Gaza’s only power plant was the first to sound the alarm of its inability to supply the people of Gaza with enough power, due to the already dire shortage of fuel that usually enters through the now-sealed Karam Abu Salem crossing.
On Thursday, the representative of the plant, Muhammad Thabet, warned of the consequences of the company’s impending depletion of fuel.
“If Israel keeps the crossing closed, the station will shut down within 48 hours,” he said. “This will affect all public utilities and vital facilities, exacerbating the humanitarian situation.”
Today, Gaza’s Energy Authority issued a statement announcing that due to fuel shortages as a result of the border closure, the Gaza power station will shut down at 12 p.m.
The company later announced that it will shut down the station, as fuel supplies reportedly ran out.
The Gaza power station has been supplying people with only 6-8 hours of electricity per day ever since 2007 with the start of Israel’s blockade of the Gaza Strip. Ever since, Israel has been limiting the amount of fuel allowed into Gaza, enough to produce only120 megawatts.
The only supplier left other than the Gaza power station is the Israeli supplier. Usually, Israel supplies Gaza with 120 megawatts per day, well below the needs of the 2.2 million people in the strip, which according to the Gaza power plant is 550-600 megawatts.
In the past four wars against Gaza, Israeli warplanes have directly targeted the power station. It was later partially reconstructed.
Half the electricity, double the suffering
Homes in Gaza become hotboxes in the summer heat, pushing people into the streets for some fresh air. Now, however, the air is filled with dust and debris, as every couple of hours an Israeli airstrike rips through the city. People are forced back inside, seeking shelter.
To spend this time indoors, in the middle of a war and without power, is hard to fathom.
“A power cut in these circumstances fills you up with anger,” said Khaled Hassan, 33, a father of four who spoke to Mondoweiss from his home located in the Gaza City neighborhood of Shuja’iyya. “Your food won’t keep in the fridge, you can’t turn on the light as the bombs go off around you in darkness, and you can’t cool your children, who don’t understand what’s going on, except that they’re now living in fear and darkness.”
Two of his kids were sleeping on the floor as he spoke, attempting to cool them down in the middle of the hot summer afternoon.
“The state of electricity in Gaza is already terrible without the continuous bombardment, and with it darkness becomes another kind of war,” said Khaled.
He describes how leaving the house becomes nearly impossible in such situations. Even going out to buy food from the market becomes a hazardous activity, so people have been forced to close down their businesses as the bombs drop.
“I can’t have food in my fridge for more than one day, or else it will rot in a fridge with no power, and I can’t go out every day to get food, so how are we supposed to survive?” he said in frustration.
His family has resorted to baking its bread at home, prepared by his wife. But his wife uses an electrical cooker, which she usually used during the scheduled 6-8 hour power window. Now that window is quickly vanishing.
“What else people in Gaza can live, dying in the dark without even seeing the news ot know what happens around us,” Khalid said.
Medical supplies running dangerously low
Due to the power shortage, hospitals in Gaza declared a state of high alert, predicting that their generators would soon run out of fuel.
Speaking to Mondoweiss, Ashraf Al-Qedrah, a spokesperson of the Palestinian Ministry of Health in Gaza, said that “medical services have been facing a huge challenge ever since the power plant announced that it will shut down.”
“All medical services requiring power in Gaza’s hospitals will stop in 72 hours if the power station remains shut down,” Al-Qedrah said.
He warned that “services at Gaza hospitals will be badly affected and paralyzed if this crisis does not end.”
The World Health Organization (WHO) warned of the impact that the border closure would have on the health sector, affecting 50 patients per day who require critical treatment outside of Gaza.