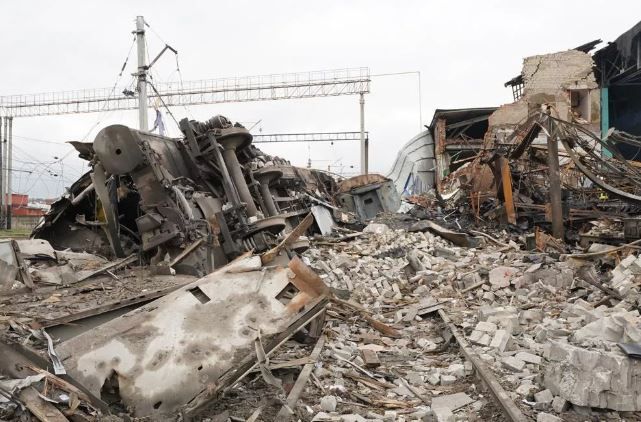 Russia positioned itself Wednesday to formally annex parts of Ukraine where occupied areas held a Kremlin-orchestrated “referendum” on living under Moscow’s rule that the Ukrainian government and the West denounced as illegal and rigged.
Armed troops had gone door-to-door with election officials to collect ballots in five days of voting. The suspiciously high margins in favor were characterized as a land grab by an increasingly cornered Russian leadership after embarrassing military losses in Ukraine.
Moscow-installed administrations in the four regions of southern and eastern Ukraine claimed Tuesday night that 93% of the ballots cast in the Zaporizhzhia region supported annexation, as did 87% in the Kherson region, 98% in the Luhansk region and 99% in Donetsk.
Pro-Russia officials in the four regions said they would ask Russian President Vladimir Putin to incorporate their provinces into Russia on the basis of announced vote results. Separatist leaders Leonid Pasechnik in Luhansk and Denis Pushilin in Donetsk said they were leaving for Moscow to settle the annexation formalities.
Ukraine’s Foreign Ministry called the balloting “a propaganda show” and “null and worthless.”
“Forcing people in these territories to fill out some papers at the barrel of a gun is yet another Russian crime in the course of its aggression against Ukraine,” it said.
Western countries also dismissed the balloting as an attempt by Moscow to legitimize its invasion of Ukraine launched on Feb. 24.
“Regardless of Russia’s claims, this remains Ukrainian territory and Ukraine has every right to continue to fight for their full sovereignty,” said White House spokeswoman Karine Jean-Pierre.
“In response, we will work with our allies and partners to impose additional economic costs” on Russia and supporters of any annexation, she said.
Separately, the U.S. announced an additional $1.1 billion in aid to Kiev, with funding for about 18 more advanced rocket systems and other weapons to counter drones that Russia has been using against Ukrainian troops. The latest package brings the total of U.S. aid to Ukraine to nearly $17 billion since the Biden administration took office.
European Commission President Ursula von der Leyen urged the EU’s 27 member countries to agree on a new package of sanctions on Russia because of the proposed annexations.
The Kremlin remained unmoved amid the hail of criticism. Spokesman Dmitry Peskov said that at the very least, Russia intended to drive Ukrainian forces out of the Donetsk region, where Moscow’s troops and separatist forces currently control about 60% of the territory.
In an interview with The Associated Press, an adviser to Ukrainian President Volodymyr Zelensky said Ukraine was determined to reclaim all the territory that Russia has seized during the war. Mykhailo Podolyak said the annexation by Russia would change nothing on the battlefield.
“Our actions depend not so much on what the Russian Federation thinks or wants, but on the military capabilities that Ukraine has,” he said.
State Department spokesman Ned Price told reporters in Washington that the U.S. would not object to Ukraine using U.S.-supplied weapons to attack those areas if they are annexed by Russia.
“We have been clear when it comes to certain longer-range systems with our Ukrainian partners that these systems are for use on sovereign Ukrainian territory. If and when this annexation occurs as we expect it will, these areas will remain sovereign Ukrainian territory,” Price said.
After a counteroffensive by Ukraine this month dealt Moscow’s forces heavy battlefield setbacks, Russia said it would call up 300,000 reservists to join the fight. It also warned it could resort to nuclear weapons.
That partial mobilization is deeply unpopular in some areas, however, triggering protests, scattered violence, and Russians fleeing the country by the tens of thousands.
The mass exodus has created miles-long lines for days at some borders, and local Russian authorities on one area along the border with Georgia said they would start providing food, water, warming stations and other aid to those in line.
Moscow also reportedly set up draft offices at borders to intercept some of those trying to leave.
The mobilization prompted the U.S. Embassy in Moscow to warn Americans in Russia to leave immediately because “Russia may refuse to acknowledge dual nationals’ U.S. citizenship, deny their access to U.S. consular assistance, prevent their departure from Russia, and conscript dual nationals for military service.”
Previous embassy security alerts issued during the war also advised Americans to leave.
Ukraine’s military and Western analysts said Russia is sending troops with hardly any training to the front line. The Institute for the Study of War, a Washington-based think tank, cited an online video by a man who identified himself as a member of Russia’s 1st Tank Regiment, visibly upset, saying he and his colleagues wouldn’t receive training before shipping out to Russian-occupied parts of the Kherson region.
“Mobilized men with a day or two of training are unlikely to meaningfully reinforce Russian positions affected by Ukrainian counteroffensives in the south and east,” the institute said.
Meanwhile, the EU expressed outrage over the suspected sabotage Tuesday of two underwater natural gas pipelines from Russia to Germany, and warned of retaliation for any attack on Europe’s energy networks.
“All available information indicates those leaks are the result of a deliberate act,” EU foreign policy chief Josep Borrell said. Perpetrators have not been identified.
Kremlin spokesman Peskov said allegations that Russia could be behind the incidents were “predictable and stupid,” saying the damage has caused Russia huge economic losses. A U.N. Security Council meeting was called for Friday at Moscow’s request.
The damage makes it unlikely the pipelines will be able to supply any gas to Europe this winter, according to analysts.
On the battlefield, the U.K. Ministry of Defense said Ukraine’s counteroffensive is advancing slowly, meeting a stouter Russian defense.
Local Ukrainian officials reported Russian attacks in the partially occupied Donetsk region that killed five people, and artillery strikes in the southern Ukrainian city of Nikopol. That city saw 10 high-rises and private buildings hit, as well as a school and power lines, said Valentyn Reznichenko, the head of the local military administration.