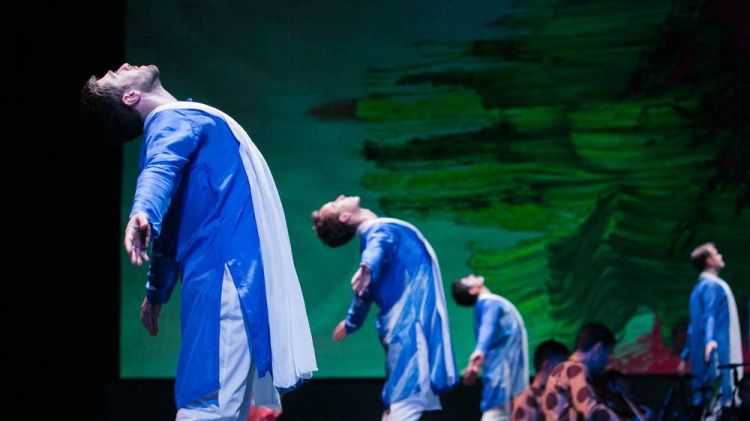 A thousand years before Romeo and Juliet cornered the market in teenage angst, there were Layla and Majnun, the tragic sweethearts of eastern literature.

Desperately in love, they are banned from marrying by Layla’s parents, who are concerned by Majnun’s obsessive behaviour and tendency to write brooding verse. Layla is married off but pines away for her lost love; they are reunited only after death.

So far, so tear-jerking. But though the tale has been hugely influential in the Middle East and Asian subcontinent, inspiring everything from plays to painting and even a Turkish comedy series, it remains little read in the West. Eric Clapton brought the poem closest to the mainstream with the riff-tastic Layla, his ode to Pattie Boyd. But how many people know that outside of a pub quiz?

Now Mark Morris has assumed the mantle of bringing it to a Western audience. The US choreographer is known for his brave music choices, and here he makes no exception. He’s teamed up with singers Alim Qasimov and his daughter Fargana — stars in their native Azerbaijan — along with the Silkroad Ensemble to whittle down Uzeyir Hajibeyli’s 1908 opera. It’s all presented against Howard Hodgkin’s luscious backdrop, with its great smudges of red, coral and green, and hot pink and blue tie-dye costumes.

Music and choreography are put on an equal footing. Throughout, the musicians sit amid the action, with dancers weaving their way among them, or dashing across raised platforms around the stage. At times this inspires some of the piece’s most arresting moments, notably Lesley Garrison’s impassioned sprint as the despairing bride Layla; at other times it seems to stifle and constrain.

There’s little plot. Instead, the opera’s five acts have been condensed into six short parts, with the name of each — such as “Love and Separation”; “Sorrow and Despair” — beamed onto screens dotted around Sadler’s Wells. A different pair plays the central couple in each section (they are identified by scarves around their necks), with the remaining dancers acting as a chorus.

Feverish words describing the action (“My soul is on fire”) pop up as Alim and Fargana’s rich, throaty vocals fill the air. A nice touch, but it only highlights the work’s biggest problem — that a story about passion can be quite so passionless. The dancers are elegant, Morris’s steps refined and restrained, but where’s the part that screams thwarted love?