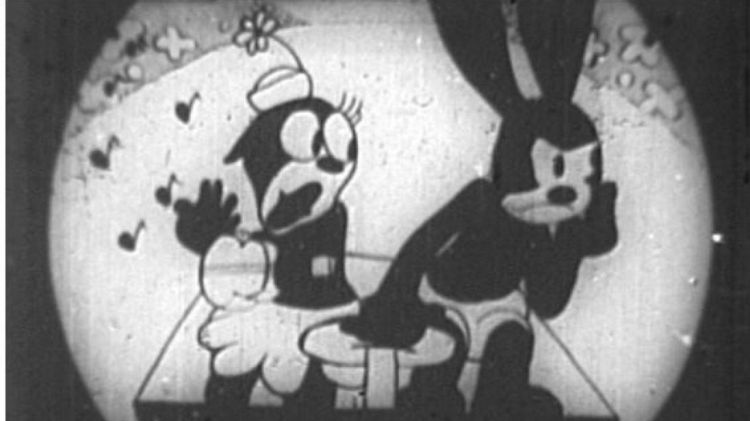 A cartoon film bought by a teenager in Japan 70 years ago has been revealed as a rare lost work produced by Walt Disney.

Yasushi Watanabe, now 84, had no idea he was purchasing animation history when he picked up the reel for just 500 yen (£3.45 today) at a toy wholesaler in Osaka.

It features "Oswald The Lucky Rabbit", a long-eared character created by Disney in the 1920s that led to his most famous work: Mickey Mouse.

The discovery was first reported by Japan's Asahi Shimbun daily; Mr. Watanabe, an anime history researcher, contacted reporters there after reading a book about the history of Oswald.

Seven of the 26 short films featuring Oswald were missing, the book said - and Watanabe remembered his childhood reel.

"As I've been a Disney fan for many years, I'm happy I was able to play a role (in the discovery)," Mr. Watanabe told the paper.

Labelled "Mickey Manga Spide" in Japanese - Mickey Cartoon Speedy in English - the film features a dog policeman on a motorbike chasing Oswald and his girlfriend in a car.

The newspaper contacted the author of the book and the Walt Disney Archives, and confirmed the reel is indeed one of the missing films, originally titled "Neck 'n' Neck."

"We're absolutely delighted to learn that a copy of the lost film exists," Becky Cline, director of the archives, told the paper.

Mr. Watanabe's childhood purchase is now being kept at the Kobe Planet Film Archive, and another film showing 50 seconds of the same cartoon has also been unearthed at the Toy Film Museum in Kyoto, the newspaper said.

Despite creating the character - complete with oversized ears and a button nose - Disney lost the rights to another company. This led to the creation of the character that would later become known as Mickey Mouse.

And Mr Watanabe's is not the first lost Oswald film to be unearthed.

In 2014, Norway's National Library announced it had discovered a cartoon titled "Empty Socks," the first Christmas film made by Disney. It was discovered during an inventory at the library's facility near the Arctic Circle.

A year later, another short film featuring Oswald was uncovered in the UK and screened for the first time in 87 years.