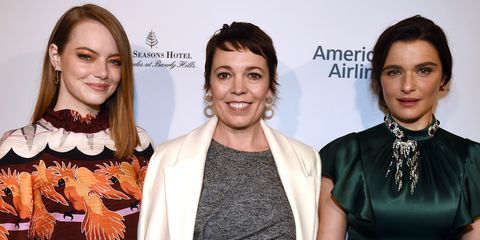 Emma Stone, Rachel Weisz and Olivia Colman -- the three main actresses from the comedy -- all received nominations for their work.

Olivia Colman won best actress in a comedy for her performance as daffy Queen Anne in "The Favourite" at the 76th annual Golden Globes.

Meanwhile, "A Star is Born" received seven nominations, including nods to Bradley Cooper and Lady Gaga for best actor and actress. Cooper, who directed the film, was also nominated for best director.

"Bohemian Rhapsody," the biopic about Freddie Mercury and British rock band Queen -- which stole the limelight from "A Star Is Born" at Sunday's 76th annual Golden Globes -- also received seven nominations. Rami Malek, who won raves for his full-throated portrayal of the late Mercury was nominated for Leading Actor, after walking away with best drama actor last week.

Other nominations include "Cold War" and "Green Book," which both received four nominations, while "Can You Ever Forgive Me?," "Mary Poppins Returns," "Mary Queen of Scots" and "Stan & Ollie" each have three.

The awards ceremony, which is seen as an important indicator for the Oscars, will take place on February 10 in London.