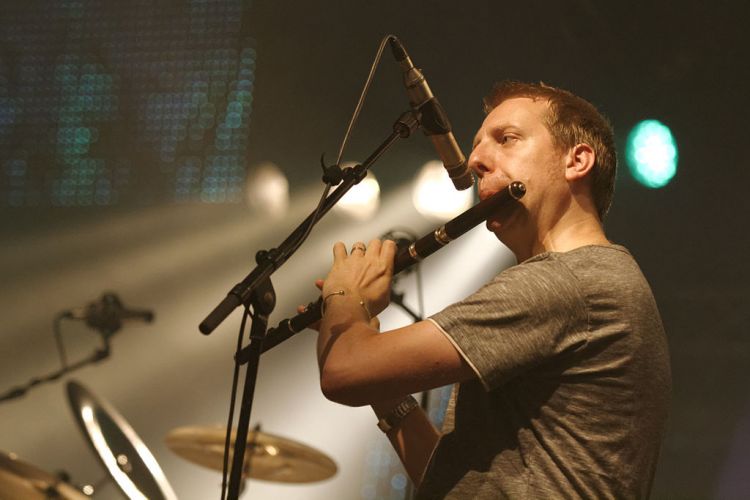 Azerbaijan is known as one of the diverse musical genres in the world. This musical richness attracts world's s famous musicians to visit Azerbaijan and learn from masters how to play in specific musical instruments. Sylvain Barou, who is considered one of the best flute players, visited Azerbaijan to learn to play the balaban form its original masters.
Having played mainly Irish and Breton traditional music, Sylvain has been part of some of the most exciting projects of the genre and played with the foremost bands and musicians such as Donal Lunny, Padraig Rynne, Guidewires, Altan, Guichen and many others. He is from France. Before he had been in Turkey and Iran to learn musical instruments. Traveling is key to discover different cultures and musical tastes. He thinks Azerbaijan music is rich and diverse.
"For many years, I traveled to Iran to learn Persian music. I like it very much. I play with Persian musicians in France. However, many people told me to come to Azerbaijan for music; they were Iranians, French and Turkish mainly. They listened to Azerbaijan music and they told me to visit here for music, to discover the culture."
"First time I listened to it I liked it so much because I found a connection. I am familiar with Iran and Turkish culture but this was something different. I was touched with this music so much. My first introduction to mugham happened thanks to Alim Qasimov. He played often in concerts in France. Sirzad Fataliyev is my favorite balaban player. I like his performance so much. He also plays zurna fantastically, better than anything I have heard before."
"I want to learn the balaban with specific techniques and styles, and the only way to learn it is to come here. There is no another possibility."
Besides his lessons, he has very good impressions about Azerbaijan and Azerbaijan people. He enjoys discovering this very rich culture and thinks of future visits here. But he said many French people still don't know adequate information about Azerbaijan culture, history.
"I am so surprised by the generosity of people; they are so nice, respectful. They ask me questions about my country. They are curious. There is no distance between us. Even if they cannot speak in English, I feel a connection with people here. Before I came here, I did not know about Azerbaijan. Unfortunately, In France, we do not really know about Azerbaijan. We know it just on a map."
Karabakh conflict, Armenian aggression against Azerbaijan, is a very familiar fact for people from different countries. For many years, Azerbaijan has been pushing for bringing this issue in the international arena to make the world community know about this aggression. Sylvian said he knows about the conflict. But he thinks some musicians are highly politicized and this excessive behavior is not acceptable.
"I know about Karabakh conflict. I read about it. In France, It is difficult to find real information about this conflict.  Because the Armenian community in France is very big. If you talk to Armenians, of course, they will tell something else. If you only talk to Armenians, not to talk to Azerbaijanis, it is impossible to know this history. That is why it is important to come here and learn about historical facts. I met with some musicians but I didn't want to keep a relationship because they are too much into politics. "
Lastly, Mr. Barou has future plans for visiting Azerbaijan. He wants to continue his lessons here and thinks of musical projects in the future.
"I want to come back for my lessons. In addition, I have another activity, which related to music. I teach music and we have a school in France. Next year I want to bring some students to learn singing, instruments with masters, to discover music here."
Islam Mammadov