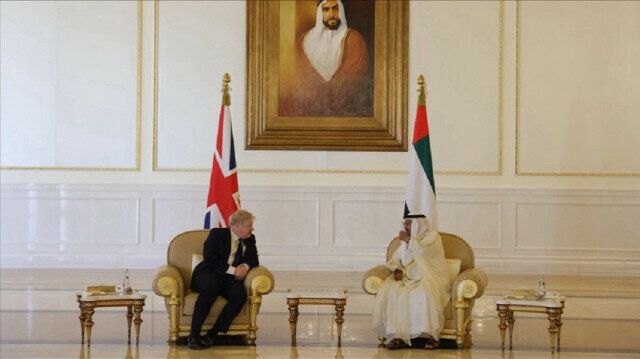 Britain and the UAE on Wednesday discussed opportunities to increase collaboration on energy security, green technology and trade, a UK government statement said.
The talks took place during a meeting between British Prime Minister Boris Johnson and the Crown Prince of Abu Dhabi, Mohammed bin Zayed al Nahyan, in the capital of the United Arab Emirates.
Johnson “set out his deep concerns about the chaos unleashed by Russia’s unprovoked invasion of Ukraine, and stressed the importance of working together to improve stability in the global energy market,” the statement said.
The two leaders “welcomed the longstanding partnership between our two countries and discussed opportunities to increase collaboration between the UK and UAE on energy security, green technology, and trade,” it added.
“They also agreed on the need to bolster our strong security, defence and intelligence cooperation in the face of growing global threats, including from the Houthis in Yemen.”
Johnson is on a one-day visit to the UAE and Saudi Arabia amid plans to reduce dependence on Russian energy resources.
The UK, alongside its Western allies, has vowed to decrease their dependence on Russian fossil fuels after its “brutal and unjustified” attack on Ukraine.
Ahead of his trip, Johnson said the world needed to “avoid being blackmailed by Putin in the way that so many Western countries sadly have been.”
“We've got to get ourselves off Russian hydrocarbons,” Johnson said.
He added: “They're a massive part of the global market for hydrocarbons. They help to drive the price.
“We need to talk to other producers around the world about how we can move away from that dependence. Vladimir Putin over the last years has been like a pusher, feeding an addiction in Western countries to use hydrocarbons, to use oil and gas. We need to get ourselves off that addiction.”
The Russia-Ukraine war, which began on Feb. 24, has drawn international condemnation, led to financial sanctions on Moscow, and spurred an exodus of global firms from Russia.
At least 691 civilians have been killed and 1,143 injured in Ukraine since the beginning of the war, according to the UN. It has warned, however, that the true toll is likely much higher as it has not been able to gain access to areas of increased hostilities.
Over 3 million people have also fled to neighboring countries, according to the UN refugee agency.