Turkey and Tatarstan to support small and medium businesses - ednews.net

Turkey and Tatarstan to support small and medium businesses 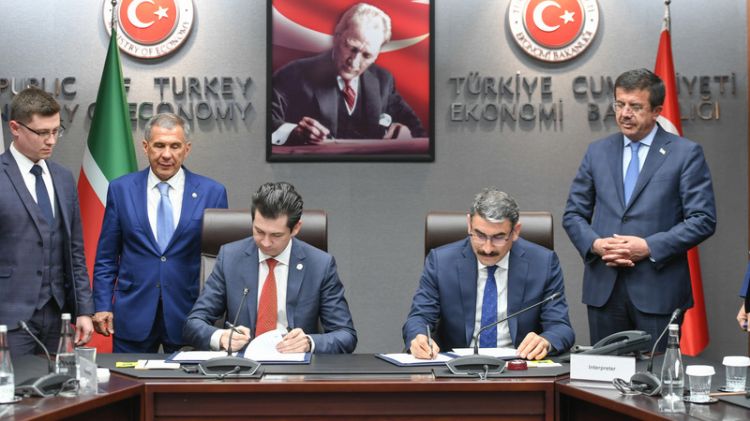 Turkey's success story in development of small and medium-sized enterprises is notable worldwide, especially developing countries, says KOSGEB head
Turkey and Tatarstan have agreed to cooperate more intensively for the development of small and medium-sized businesses (SMEs), according to the head of Turkey's Small and Medium-Sized Enterprises Development Organization (KOSGEB), Hasan Basri Kurt.
The parties plan mutual exchange programs through a jointly agreed action plan as part of the memorandum of understanding (MoU), inked by KOSGEB and the Tatarstan Entrepreneurship Development Fund, during the 13th International Economic Summit, Russia-Islamic World: Kazan Summit 2022, held in the Russian Republic of Tatarstan.
Kurt said the two institutions would work together intensively to develop SMEs in Turkey and Tatarstan, building on the existing strong bilateral relationship.
"We see new opportunities in which we could collaborate in many areas,” he said.
The mega international economic gathering, of which Anadolu Agency is the global communication partner, aims to strengthen relations between Russia and member countries of the Organization of Islamic Cooperation (OIC), addressing the subjects of partnership finance, the halal industry, export development, entrepreneurship, and investment.
The halal industry was a key focus of the summit, and according to Kurt, a rising industrial trend worldwide, particularly in Muslim countries.
This industry has seen much progress in Turkey, and part of the work of KOSGEB will be to ensure that its businesses receive halal accreditation.
"We are currently offering 10,000 Turkish liras of certification support to our SMEs, who want to obtain certification from the Halal Accreditation Organization," Kurt said.
- KOSGEB ready experience sharing with Russia and OIC countries
Kurt highlighted the importance of developing SMEs in OIC countries, given the contribution that they can make to employment, economic development, and social stability.
He cited the example of Turkey as a country that has received much attention worldwide for its success in developing SMEs over the past 20 years.
The country’s exports have increased exponentially, and SMEs are gaining greater ground in the shares of these exports while contributing to the economy and offering employment, he said.
The role of KOSGEB is to represent Turkey as best as it can by sharing its success stories with other interested, developing countries, Kurt concluded.